Since the Irish Wildlife Trust Ladybird Survey began this year we have been delighted with the enthusiasm and interest from the general public in ladybirds and their conservation and would like to thank everybody who has submitted a record.

However, we still need your help, especially with reliable records of the invasive harlequin ladybird. Records for this species so far have not been conclusive and the Irish Wildlife Trust is asking that if you see this ladybird (and other ladybird species) it is important that you take a photograph for verification. It is especially important for us to learn of any records in Dublin, Galway, Limerick or Waterford. Photos of the Harlequin are on the IWT Ladybird Facebook page and www.biology.ie. 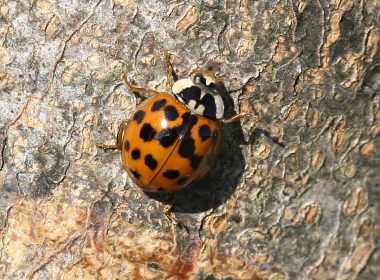 The Harlequin is a large ladybird of between 6-8mm. It has two common forms as shown in the photographs. If you see a Harlequin, please take a photograph and upload it on www.biology.ie or email it to iwtladybirdsurvey@gmail.com.
For further information on the survey, please contact Gill Weyman, IWT Ladybird Survey Co-ordinator at iwtladybirdsurvey@gmail.com.
This project is funded by Fota Wildlife Park.  Photos: courtesy of Moris Midgely and Ken Dolbear.
Tweet
Share
Pin
0 Shares
Previous Post IWT objects to classification of Wild Boar Next Post Sustainable fishing options for inshore fishermen