Vote: Farming Together for Biodiversity Award 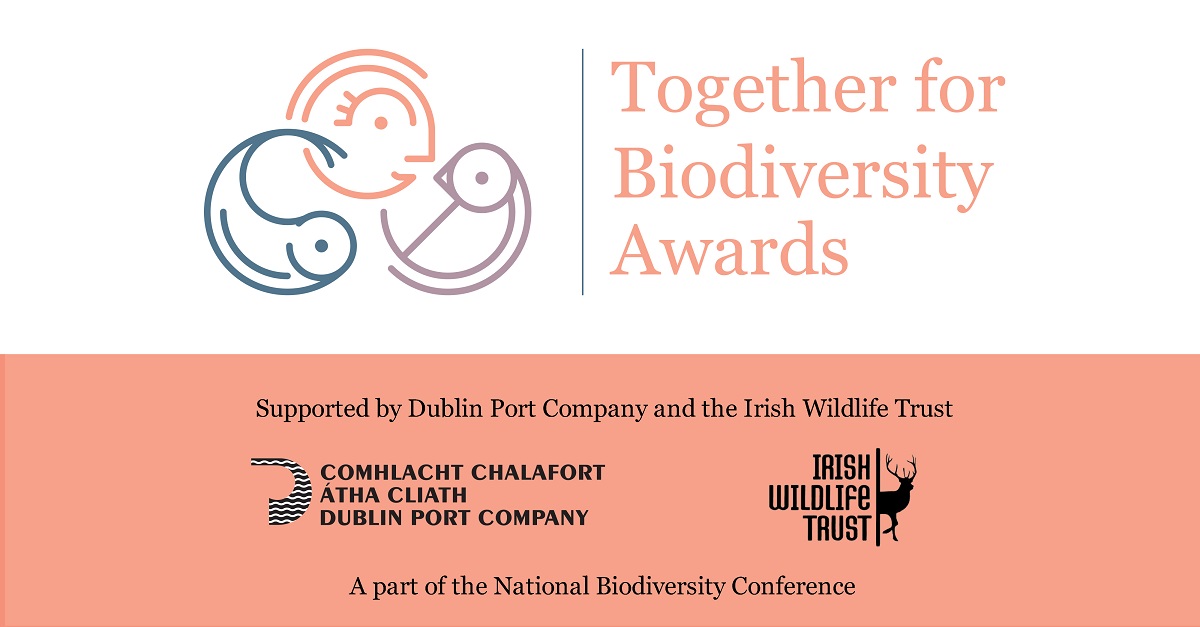 Farming Together for Biodiversity Award 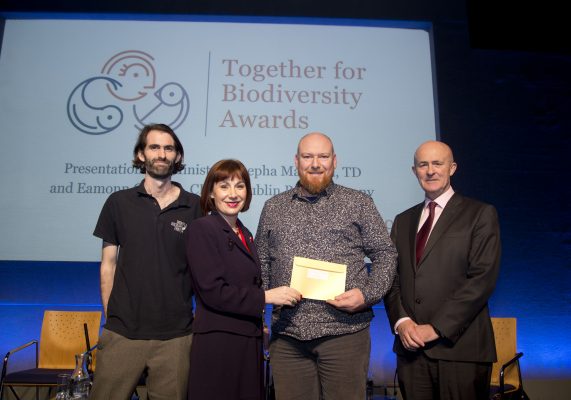 PROJECT A: AranLIFE: The sustainable management of the priority terrestrial Habitats Directive Annex 1 habitats of the Aran Islands. 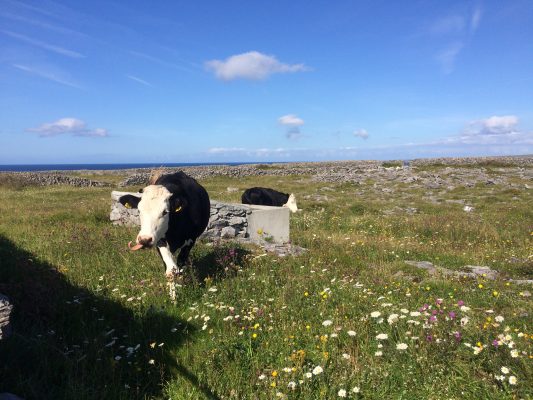 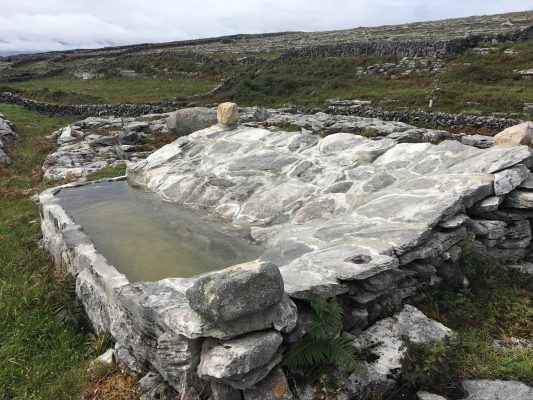 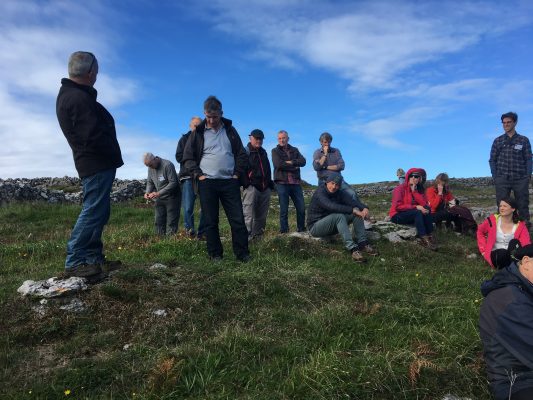 AranLIFE is an EU co-funded LIFE project based on the Aran Islands that ran from September 2013 to September 2018. The objective of the project was to work with a selection of farmers on the island to improve the condition of three priority habitats, calcareous grassland, limestone pavement and machair.  The project was based on the principle that optimum grazing was best management to improve the ecological interest of the grasslands and the farmers carried out a series of actions that improved the habitats and ensured adequate grazing. Works included, improvements in access, removal of scrub, provision of water facilities for grazing livestock followed by optimum grazing. The results were monitored by the AranLIFE team. Further details can be found at www.aranlife.ie.

Míchéal carried out a range of works on his farm to improve habitat condition including opening of boreens, provision of gates to aid stock movement and in doing so kept the boreens cleared. He also cleared large areas of encroaching scrub on existing habitat, constructed new raincatchers and restored existing ones on the farm that allowed the additional grazing required to benefit the habitat. All this greatly helped the condition of the calcareous verified through the projects monitoring work. The grasslands on his farm have a high species count (over 40 plants per quadrat) and associated insect life including Brimstone Butterfly, Small Blue Butterfly and the Dingy Skipper and bird such as meadow pippits, skylarks which flourish on the winterage as they are undisturbed.

The positive biodiversity impact of the project

The work fitted into the overall AranLIFE project to improve the condition status of the limestone pavement, calcareous grassland and a mosaic of the two.  Removal of scrub such as Briar and blackthorn allowed grassland plants to flourish. Míchéal followed up on the work, recutting after growth, rebuilding of walls and reintroduction of grazing in some areas. This also involved construction of raincatchers to supply adequate water for the livestock which is a vital part of maintaining or improving favourable condition. In addition Míchéal work closely with the project team, supplying any support needed, which range from lifts, storage of equipment or any monitoring required on the farm. All this greatly aided in delivery of AranLIFE.

PROJECT B: The Burren Programme 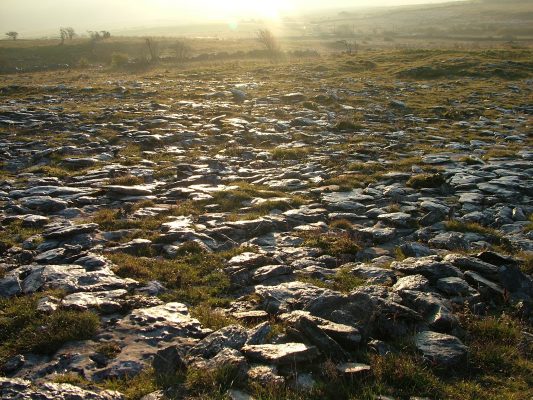 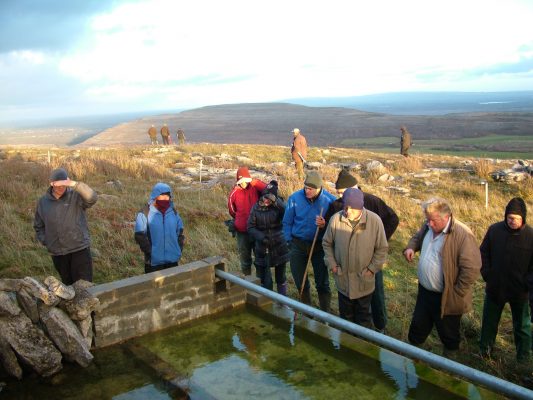 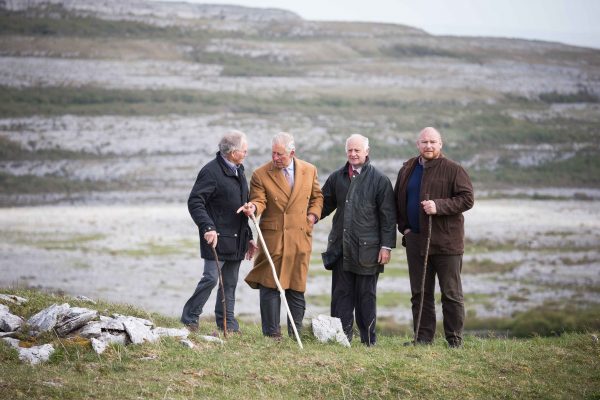 The Burren Programme (BP) aims to protect and enhance the habitats, water quality and cultural heritage of the Burren region. Encompassing an area of c.22,000ha and working with over 300 farm families, the BP commenced in 2010 and is built on the findings of the award-winning BurrenLIFE project (2005-2010). The BP focusses on a range of priority habitats including orchid rich calcareous grasslands, limestone pavements, turloughs and petrifying springs, while respecting and protecting the rich archaeological heritage of the region and helping to celebrate ancient – but living – traditions such as ‘winterage’.

A pioneering project, the BP is locally led, managed by a team based in the Burren village of Carron, under the supervision of a multi-actor steering group which includes agricultural and conservation authorities. The BP adopts a ‘farmer-centered’ approach, using a range of innovations – simple farm plans, new nutritional systems for outwintering livestock, flexible payment systems – designed to encourage and support farmers to improve their local environment.

The BP is funded by the Dept of Agriculture, Food and the Marine through the Rural Development Programme, and supported by the NPWS. For more information, please visit www.burrenprogramme.com

Pat and Oliver’s farm is a great example of a Burren Winterage – a mixture of species rich calcareous grasslands and heaths, pavements and springs, containing a range of archaeological features including bronze age burial cairns and prehistoric field systems.
Since 2010, under the Burren Programme, Pat and Oliver have done a huge amount of work to improve the environmental and agricultural condition of the farm, including:

– walling off several springs to protect them from damage by livestock; these watering points have now become habitats for a range of species including frogs, newts and water beetles;
– removing invasive scrub (mainly hazel and blackthorn), bramble, bracken and weeds from areas of exceptionally high-quality, species-rich grassland, thereby restoring these grasslands to their optimal condition;
– restoring dilapidated field walls and installing locally-made Burren gates in order that grazing can be targeted to address certain conservation challenges, including the dominance of Molinia grass in parts of the farm (Molina requires targeted summer grazing to control it);
– installing low-visual-impact, solar-powered fencing to target grazing in certain areas;
– discontinuing a silage-based supplementary feeding system which was damaging local water, soils and habitats, and replacing it with a ration-based feeding system which is much more carbon-efficient, has minimal impact on water quality, helps improve grazing to required levels and improves animal health and performance.

This work has been done to an exceptional standard, with each year bringing a new set of jobs to be done, usually entailing work/income for local contractors and suppliers.

The positive biodiversity impact of the work

Of the 330 farmers currently participating in the Burren Programme, Oliver’s Winterage (composed of 5 separate management units) is the only one in the entire programme where all the fields have improved in condition over the years to the degree that they all now score 10 out of 10. The average score across the BP farms is 7.4, so scoring a 10 is truly exceptional, and this is reflective of the impeccable management system – and extraordinary attention to detail – which Pat and Oliver have implemented.

The impact on biodiversity is clearly evident. The protected watering points host a vibrant array of wildlife. The well-grazed rough grasslands are stunningly colourful and species rich, hosting an array of bees, butterflies and birds. Skylarks and cuckoos abound, as do Burnet moths and fritillary butterflies. The place is so alive with colour and sound during summertime. Species such as Spring gentian, Mountain avens, Bloody cranesbill, Cat’s paw are abundant, as are a wide range of orchid species.

As winners of the first ever ‘Burren Farming for Conservation’ Award in 2015, the Nagles have also had a big impact on biodiversity by acting as relatable role models for other Burren farmers who want to ‘farm for nature’.

PROJECT C: KerryLIFE Project – “Sustainable land use management for the conservation of the freshwater pearl mussel.” 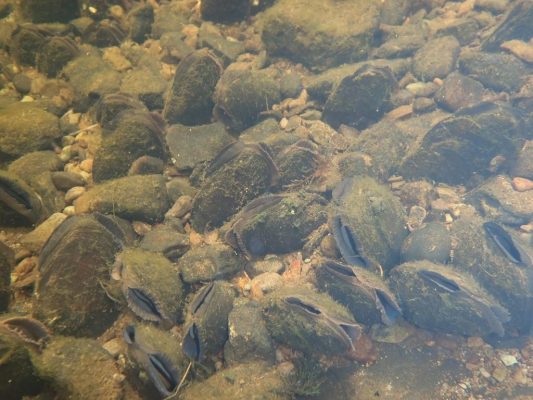 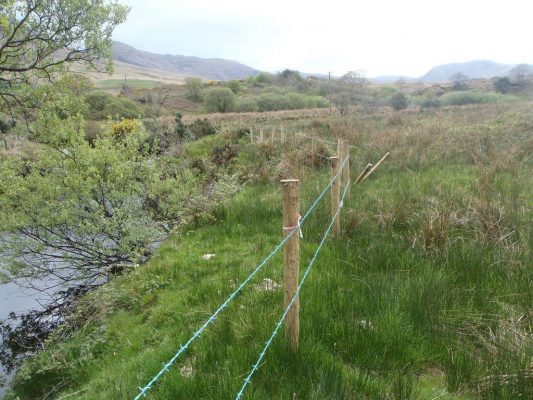 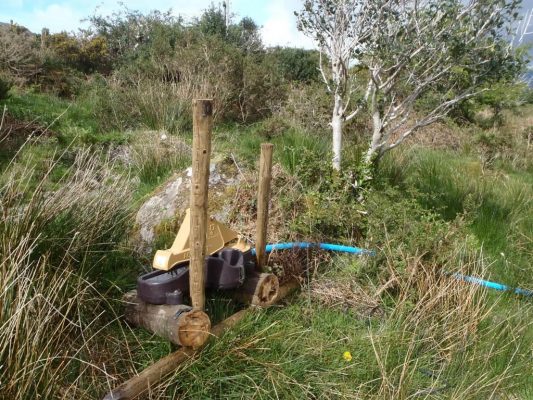 KerryLIFE is a demonstration project to restore two of the largest populations of freshwater pearl mussel (Margaritifera margaritifera) in Ireland. The project works closely with 40 farmers and public and private forest-owners to trial practical conservation measures to improve water quality and restore the habitat of the mussel in the Caragh and Blackwater catchments.

The pearl mussel is a large, thick-shelled mollusc with a complex life cycle that involves a salmonid host. Mussels can be found in clean, well-oxygenated rivers that flow over non-calcareous rock dominated by open peat land habitats. The landscapes in which the rivers flow and the mussel live in, are rich in diverse habitats like wet heaths, dry heaths, blanket bogs and wet grasslands which are all key to supporting the conservation condition of this very sensitive species. Mussels are very sensitive to small changes in river flow patterns, elevated siltation and nutrient enrichment associated with restructuring and drainage of farmland, riverbank erosion, overgrazing, inappropriately located forestry and clearfell forestry management. While occurring throughout Ireland, the Caragh and Blackwater catchments host the two largest populations with an estimated 46% of the national resource.

KerryLIFE (LIFE13 NAT/IE/000144) is a €5 million partnership project between the Department of Culture, Heritage and the Gaeltacht, Department of Agriculture Food and the Marine, the Forest Service, Coillte, Teagasc, Pobal and South Kerry Development Partnership. It is co-funding by the European Union’s LIFE+ Nature funding programme for the environment. The main objectives of KerryLIFE are to demonstrate practical conservation measures and land use management techniques; enhance awareness and understanding of pearl mussels; and produce guidance for farming and forestry sectors.

John Foley runs a suckler beef enterprise with 25 animals in Glencar, Co. Kerry. The farm is 86 hectares in size, spread across two blocks of land that run along pearl mussel habitat in the Caragh and Owenroe Rivers. The farm is made up of wet grasslands, blanket bog, wet heath, native woodland, semi-natural grasslands and mountain. John started his KerryLIFE farm management plan in 2016 for a 3 ½ year term with works focused on excluding cattle from the watercourses, improving the condition of the farmland habitats surrounding the mussel habitat, and reducing nutrient inputs.  To date, John erected over 2,850 m of fencing to exclude cattle from watercourses and enhance livestock management across his farm. 20 drains on his farm have been managed to intercept sediment, promote revegetation and slow water flows. 15 cattle drinking points in pearl mussel habitat were fenced off and replacement water troughs (e.g. nosepumps) installed away from the river. Through livestock management habitat condition has improved across 14 hectares from moderate to very good condition, resulting in less bare soil and improving vegetation structure within two years. John reduced his nutrient inputs by reducing his herd size, replacing some continental cows with smaller traditional breeds more suited to the terrain and by switching to nitrogen based fertilisers to reduce Phosphorus inputs which result in nutrient enrichment. The herd was also split between two blocks of land to spread the impact of outwintering more evenly.

The positive biodiversity impact of the work

The agricultural system now in operation on the farm is more environmentally friendly. It protects the freshwater pearl mussel by excluding livestock from watercourses, reducing bare soil, reducing farm nutrient inputs and restoring flows. This prevents trampling of mussels by livestock, prevents riverbank erosion and slumping, delivers a reduction in sediment reaching the rivers, and reduces the nutrient concentrations in the watercourses. The conservation measures are improving water quality ensuring the conditions for adult and juvenile mussels need are achieved.

The work has also had a positive impact on the wider ecology of the river and its catchment. Getting the conditions right for the pearl mussel, the most sensitive species ensures that that the conditions for a wide range of other protected animals such as salmon, trout, river lamprey, and otters are also achieved. The farm measures implemented have also resulted in improved condition of wetland and peatland habitats on the farm that support a wealth of rare plants and animals. These intact and functioning wetland and peatland habitats also deliver ecosystem services such as carbon sequestration and storage and flood alleviation.

This project is sponsored by Dublin Port Company