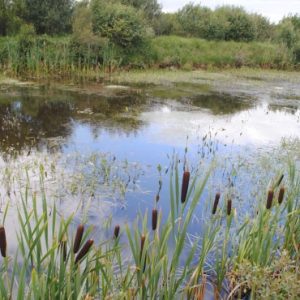 Lough Boora Co Offaly is the site of a vanished ancient lake whose shore was once inhabited by prehistoric man.  A smaller modern lake called Lough Boora was drained in the 1950’s by Bord na Mona but never put into peat production and it was subsequently bought by the IWT to be preserves for its wildlife.  What used to be the bed of Lough Boora is now a 50 hectare wildlife reserve that has been left undisturbed for nature to reclaim for itself.  Large swards of purple moor grass, reed beds and native, deciduous birch woods are a few habitats that have developed on the site thus far.

The IWT intends to carry out detailed habitat surveys of the site in order to produce a habitat management plan and public information displays on site.

It is worth noting that adjacent to the reserve the remains of a Mesolithic settlement were found. The remains date from 6500BC, which means they are evidence of some of the earliest human settlement on the island of Ireland.  These early humans would have depended on the lake for survival and who knows what other artefacts may lie buried here.