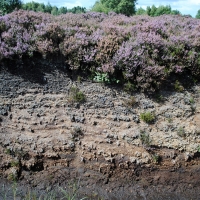 The drama over the end of turf-cutting has resulted in misunderstanding, acrimony and lost trust. In the Autumn 2011 issue of Peatland News, the bulletin of the Irish Peatland Conservation Council, Dr. Catherine O’Connell gives her synopsis of the whole sorry tale.
The IPCC works to promote the conservation of Irish bogs through education, research and managing bogland sites.

Ireland is rightly famous for its bogs with an estimated 16% of our land area under peat. Boglands are a part of our culture and heritage and are home to a unique array of plants and animals. Not only are they amazing habitats but they help to alleviate the effects of climate change by locking away carbon; they act as enormous sponges, storing water and so preventing flooding during heavy rain; and they purify our water – helping to provide our homes and business with a clean supply. Ireland has two main types of bog: raised bogs, which formed out of lake basins and are found throughout the Midland counties; and blanket bog, which is found in uplands and areas of high rainfall in the west of Ireland.

However, our bogs have been seriously damaged over time with the Irish Peatland Conservation Council estimating that only 8% of our raised bogs are of any conservation value. Meanwhile, in a report to the European Commission by the National Parks and Wildlife Service of the Department of the Environment in 2008, the remaining areas of ‘active’ raised and blanket bog habitats were assessed as ‘bad’.  While turf-cutting for fuel has gone on as long as there have been people in Ireland, the industrialisation of peat extraction from the 1950’s laid waste to huge areas of bog that are visible from space! (enter 53°15’34.80″ N   7°53’33.45″ W  in Google Earth to see the brown scars across county Offaly).  All turf-cutting is bad for bogs as it lowers the water table and dries them out. No bog in Ireland is in pristine condition. Many bogs are so badly damaged that continued small-scale turf-cutting is no longer an issue however this makes the few remaining areas that are relatively intact all the more valuable.

In 1999, the implementation of the EU’s Habitats Directive in Ireland should have seen an end to turf-cutting on the most valuable midland raised bogs that were designated as Special Areas of Conservation.  However the government at the time sought, and got, a derogation from the EU of 10 years before this damaging practice was to cease.  Since this time turf-cutting has continued apace and our heritage and biodiversity continues to be lost.  Since 1999 the IWT has been calling for an immediate end to the derogation and a halt to all turf-cutting on SACs.  In 2010 we welcomed the belated end of the derogation and the implementation of turf-cutting bans on some bogs.  This will apply to more bogs in 2011, however, there is currently no restriction to turf-cutting on blanket bog SAC. We are calling on the Minister for the Environment to immediately enforce Irish and EU legislation in this regard and take the preservation of our biodiversity seriously.

In May 2014, the IWT made a submission to the National Peatlands Strategy. Available to download here.

IWT Submission to the National Peatlands Strategy with a synopsis of our recommendations and findings.