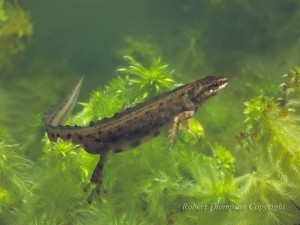 Starting with a pilot project in 2010 the IWT newt survey came to an end in 2013 is was the first comprehensive attempt to study the distribution of this native amphibian in Ireland.

Ireland has only three species of native amphibian: the common frog, the Natterjack toad (confined to sand dunes in Kerry and Wexford); and the smooth newt. The results have revealed that smooth newts are widespread in Ireland with positive records coming from Cavan in the north to Cork in the south, and from Dublin to Connemara. Newts are only found in still or slow moving water so the preservation of ponds, ditches and wetlands is essential to their survival. While smooth newts were scarce in agricultural landscapes the IWT survey revealed that man-made habitats, particularly garden ponds and quarries are now significant components of the newts natural habitat. We have also confirmed that newts are to be found in bogland habitats somewhere that had previously been discounted as suitable for this species.

During 2012 we also recorded an alpine newt, a first for Ireland, and a species that is normally to be found in continental Europe. It was likely to be an escapee, or perhaps a deliberate release. We also discovered a possible case of Rana virus in county Kildare, a worrying development as it is a disease that has devastated populations elsewhere.

Being an amphibian, the smooth newt depends on healthy wetland habitats for its life cycle. Wetlands are vital for people too – cleaning and storing water, storing carbon to mitigate climate change, alleviating flooding and enhancing valuable amenity and tourist areas. The IWT National Newt Survey highlights the importance of protecting these habitats for newts and people alike!

Our survey has been carried out with the help of Dublin Zoo,Fota Wildlife Park and the Heritage Council and we are grateful for their continued support. Crucially we relied on a small army of volunteer ‘citizen scientists’. Our enthusiastic naturalists have provided real scientific data that is promoting conservation in Ireland. Thank you to all who participated.