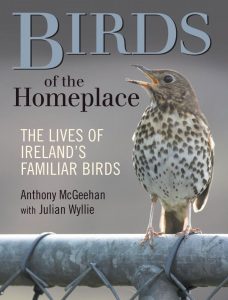 Birds of the Homeplace
Anthony McGeehan with Julian Wyllie

A review by Rónán McLaughlin.

Many years ago as a child growing up in Malin head, Co. Donegal, I was surrounded by nature. It was everywhere and everything we did revolved around it. We farmed, we fished and we felt grateful for the arrival of the swallow and we had a somewhat somber feeling when the barnacle geese arrived. When I was 12, I found this small little green warbler in our ‘garden’ and I wanted to know what it was. Alas 25 years ago Irish bird books were scarce. So for my 12th birthday I was given Alan J Richards “British Birds” a photographic guide to the birds of Britain. It had one picture of each species of bird and some text supplied.

This is the way most people perceive bird books.  A few pictures of birds and a bit of text. How things have changed! Bird books have developed in recent times, they have become literary works, and this book brings that development to a new level.

Anthony McGeehan, who hails from Belfast, has been watching and photographing birds since childhood. His first book “Birds through Irish eyes”, which was also a collaboration with Juilan Wyllie, attracted much favorable comments upon publication in 2012.  This book has received further positive reviews.

To quote The Irish News, it is a “masterpiece of knowledge”, an “appealing trademark style is relaxed and vernacular”: The Irish Times and “an encyclopedia of bird lore” via The Sunday Independent.  This book which appears to have a broad aim has all of this and more.  McGeehan and Wyllie, showcase over 70 species of familiar and some not so familiar Irish birds. From the great tit “a master of mimic but sticks to a unique pattern when “giving out” or shadowing a trespasser”, to the grasshopper warbler, who’s “porker-pink gangly toes clasp vegetation with the touch of newborn fingers”.

The book is full of anecdotes, visually descriptive quotes and pure fact.  The “Birds of the Homeplace” is a fascinating read, not just for the enthusiast’s point of view but also those that have a passing interest in birds, or those who are willing to learn.

“We the Irish are a standing army of lay birdwatchers”. The first line of the book sucks the reader in but what does he mean? It seems that it’s in reference to our personal space and those we all share this space, wherever that may be, with our avian friends of all shapes and sizes. Chapter 1 sets down our attachment to birds and our desire to learn more about them. If one thing can be said for the script and language used it is the author’s unique take on how he perceives birds. His language is visual and detailed and brings us closer to the heart of the book and its overall aim, i.e. to bring us into the unseen lives of familiar birds.

The commentary is always visual and informative, rich in humour and a writing style that is unique to these authors.  Throughout the book the author uses song or literature familiar to most to describe the various songs and calls of birds. They often compare songs and calls to the literary works of Joyce, Beckett and Wilde, to assist the reader in explaining the often complex range and diversity of bird song and call.

The book also has a serious side. Did you know that 80% of your vitamin A comes from plants pollinated by bees? Or how has the changing farming landscape affected the food chain?  The authors describe how silage grass has replaced hayfields and that fertilizer promotes growth but destroys wildflowers and insects. This intensification has a knock on affect on our food chain and directly affects our birds. The authors ask the reader “when did you last scrape a residue of life off your windscreen”?

Later in the book the authors have a chapter on binoculars, telescopes and bird photography. An interesting chapter that should help with the often daunting task for any new hobbyist looking to purchase their first field equipment.  Close to my own heart is the bird photography section. The authors show here that you don’t need expensive equipment to take great bird pictures. Patience, knowledge of behavior and a degree of sleuthing are all paramount but they also explain that the subject must come first. The authors describe in detail the do’s and do not’s of bird photography. A very useful chapter for those who want to take pictures of birds but also for those of us that consider ourselves a little more experienced.

The authors detail over 70 bird species and there is something to keep everyone entertained.  “Blackbirds stalking worms employ a rugby scrum ‘Crouch, touch, engage’. When a peregrine falcon attacks from above it reaches such a velocity (70-90 metres per second) that the G-force encountered would make a human pilot blackout.  The species accounts continue the familiar visually detailed script that is familiar throughout the book and it continues to grasp the reader. It makes you want to turn the page to see what other fact, lore or anecdote will come next.

The “Birds of the Homeplace” is a great book that infuses the reader with visually descriptive text, great photographs of the subjects and draws the reader close to our familiar birds. The book brings to life in thought provoking words the lives of Ireland’s familiar birds.  It is a book that would have a place on many a bookshelf, from the beginner to the enthusiasts alike.