Irish Wildlife Trust calls for all burning of uplands to be banned under any revision of the Wildlife Act. 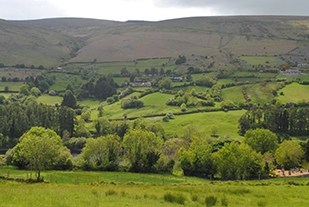 The Irish Wildlife Trust (IWT), in its submission to the proposed changes in the open season for hedge-cutting and burning of vegetation in the Wildlife Act, has called for all burning of upland vegetation to be banned. Upland habitats in Ireland have suffered a massive loss of biodiversity in recent decades due to misguided public policy, unregulated turf extraction, over-grazing by sheep and uncontrolled burning. In the assessment prepared by the Irish Government for the European Commission in 2013 all upland habitats were assessed as ‘bad’[1]. Birds breeding on upland habitats and listed as of critical conservation concern include golden eagle, red grouse, golden plover, curlew, nightjar, meadow pipit, ring ouzel, twite, and whinchat; while a number of others including merlin, hen harrier and skylark are on BirdWatch Ireland’s ‘amber list’[2].

IWT Campaign Officer Pádraic Fogarty says “the environmental situation in the uplands is dire. A combination of disastrous Government policy and annual, illegal burning has already destroyed most of the upland habitats and driven species to the verge of extinction, even in National Parks. If this is to be reversed all burning should be prohibited immediately.”

Records from the National Parks and Wildlife Service in Wicklow National Park show that this type of burning has taken place every year since the records commenced in 1997. They also show that the majority of fires are on heather and not gorse as is typically reported in the media. This practice allows no opportunity for the vegetation to recover and results in permanent, long-term damage to habitats. Recently published research from the University of Leeds has revealed the extensive environmental damage caused by fire on peat soils. The negative effects include pollution to rivers downstream, carbon loss from the soil (in addition to that lost during the fire), and loss of biodiversity[3].

The IWT is also calling for an extension to the closed season for hedge-cutting, scrapping the existing confused system of exemptions, and issuing better guidance to Local Authorities for hedgerow maintenance.