COPs – what are they good for?

COPs – what are they good for?

It’s nearly 30 years since world leaders met in Rio de Janeiro, Brazil for the Earth Summit. I recently bought a copy of TIME on eBay which anticipated the event with the cover headline ‘Coming Together to Save the Earth’.

“What kind of planet will our children inherit? Will they have room to roam, air to breath and food to eat? Will they ever see an eagle flying free or enjoy the solitude of a pristine mountain lake?… Will the countries represented at Rio show the courage and vision and leadership necessary to protect our planet for future generations? The answer is not certain, but there is some hope.”

What hope remains after three decades that has seen greenhouse gas emissions, deforestation, pollution and overexploitation all rise exponentially to the point that we face the real possibility of tipping our civilisation over the edge?

In the end, Rio produced more than just speeches, it defined the architecture through which governments have tried (let’s be charitable) to address the two main environmental concerns of our time: climate and biodiversity. It resulted in the United Nations Framework Convention on Climate Change (which went on to spawn the Kyoto Protocol and the Paris Agreement) and the Convention on Biological Diversity (which was signed up to by all nations except the US). The signatories to these accords are referred as the ‘parties’ and their biannual meetings are the ‘conference of the parties’ or COPs. 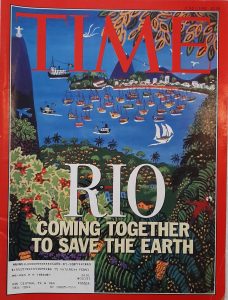 Momentum is now building towards COP26 which will take place in Glasgow from November 1st to 12th and is officially being hosted by the UK and Italy. If you haven’t already heard of it this is likely to change as an enormous level of media attention is planned. Even RTÉ have said their SixOne and Morning Ireland shows will come live from Glasgow on the day it opens and have assigned George Lee as a lead reporter for the event. The expectations for the summit are centred on financing and whether we can still hold on to the goal of maintaining the rise in global temperatures to 1.5˚C.

But why should we expect anything from this summit? So many promises have been made before and which were quickly forgotten. If past form is anything to go by, expect too that media attention will quickly evaporate once the delegates have gone home. One thing we can be sure of is that there will be plenty of lofty speeches but ignore the ones that say anything like ‘this is the last chance for action’. Just like every day that passes when nothing is done makes matters worse, there is no point at which action ceases to be useful. This summit is likely to be a failure, like all the ones before it, but the show will roll on. If we fail to meet the 1.5˚C target (and many already think this is impossible), the fight will be on to stay within 2˚C. If that is missed, we need to stay within 2.5˚C, and so on.

But there is another COP that you almost certainly have heard nothing about: that’s the COP15 on biodiversity. After Covid-related delays, this is now due to take place in Kunming, China at the end of April 2022 but also consists of an online event taking place this week (October 11th). I will be amazed if this is acknowledged anywhere in Irish media but then again, the ‘declaration’ which is expected to be signed off this week, is one of the blandest documents I’ve read in a while, with no concrete proposals at all. The real work, it would seem, is being left to the April meeting.

The deal being referred to as the ‘post 2020 Global Biodiversity Framework’ which will see yet another ‘commitment’ to ending biodiversity loss, this time by 2030, with full restoration of ecosystems by 2050. There is at least acknowledgement that since this was last attempted (at COP10 in Japan in 2010), not a single target of the text that was then agreed has been fully met. Nevertheless, the EU is working with China to ensure that a meaningful deal will be done. Our own minister, Malcolm Noonan, who has, unlike his predecessors, been seen turning up to biodiversity-related summits of late, may even engage with the meetings this week.

Last week, EU Environment Commissioner Virginijus Sinkevičius was in Dublin where he met a delegation of NGOs, including the IWT. We put it to him that the European Union cannot turn up to events like COP15 thinking it is a leader, with its ‘Green New Deal’, when we are failing to enforce so many key environmental regulations at home. Overfishing goes on, Marine Protected Areas are just ‘paper parks’, old-growth forests continue to be felled etc. We’re all wondering when the talking is going to be matched by action.

The EU will go to China next year supporting the goal of protecting 30% of land and sea by 2030 (the so-called 30×30 target), something which is already within its Biodiversity Strategy. But then we also see that a key target, that 10% of land and sea should be ‘strictly protected’, has been watered down in the most recent communication to include areas that could be ‘grazed or mowed’, evidently something that is totally contrary to the idea of ‘strict protection’ for a natural ecosystem. The omens for anything meaningful to emerge from this process are not good.

Will anything of substance emerge from the COPs? The answer must surely be ‘no’, but with the crisis only worsening, the chances of something happening at some point can only increase.

The TIME article, which was written ahead of the Rio summit itself, concluded that “if the world’s environmental problems did not get solved in two years of preparatory negotiations [before the summit], they can hardly be solved in 10 days dominated by banquets, receptions and photo opportunities”. Rio, ultimately, cannot be seen as a success but it has left us a legacy through which we could still solve the issues at hand, were the desire there to do so.

So, as we look ahead to the COPs, maybe it’s best to temper expectations and knuckle down, knowing that there’s an awful lot more work to be done.

Tweet
Share
Pin
0 Shares
Previous Post Rewilding Ireland – where will be first? Next Post Press Release: Irish Wildlife Trust welcomes restoration of funding to the National Parks and Wildlife Service but much more needs to be done