The Burren winterage festival just finished up with its annual cattle drive. Now in its 20th year it is a reminder of an ancient tradition of transhumance – the movement of cattle from the lowlands to upland winter grazing pastures. It is this practice that lies at the heart of the ecological diversity of the Burren grasslands, as the same pastures are left to grow during the summer, thereby promoting the range of plants and insects that make them of European significance.

These days, the future of the grasslands and farmers who drive the cattle in this part of Clare seem secure. For nearly two decades, the farmers have been paid a top up on their income for maintaining the biodiversity and the human heritage of the region (stone walls etc.). Individual fields are scored by ecologists and the better the score, the greater the payment, hence this is known as a ‘results-based’ scheme (as opposed to the more common form of agri-environment scheme which pays farmers for actions whether or not they result in any measurable benefit). 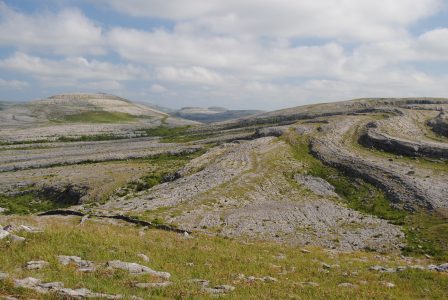 The success of the Burren was born from rancour, and in particular the vision for a tourist development that was not shared by all in the community. At the time, the European Union’s Habitats Directive was being rolled out and ‘special areas of conservation’ (SACs) were being designated to protect the flower-rich grasslands. The combination of the SACs, the ultimate failure of the development to get planning permission and some enterprising local people, notably Brendan Dunford and the Burren Beo group, led to the birth of the results-based scheme and the popularity of the annual winterage festival.

The formula is now being trialled across Ireland in some dozens of ‘European Innovation Partnerships’ (EIPs) that use a combination of EU and national funding to support the ‘locally led’ schemes. ‘Locally led’ because the applications are made by local collectives, the farmers or landowners are not told what they have to do (participation is voluntary) and the solutions to any given environmental issue comes from the people involved. National support is bolstered by ecological expertise, thus the three legs to the stool that are essential for positive conservation outcomes.

Among the events of this year’s festival was a day-long presentation of some of the EIPs which are currently underway. These include promoting Hen Harrier breeding success, better management of upland commonages, increasing biodiversity on dairy farms and promoting agro-ecological farming techniques to restore soil health and move away from artificial chemical inputs. The atmosphere of the day was positive and the farmers – who were centre-stage – clearly felt empowered and recognised by the work they were doing. Dunford captured the mood when he suggested that farmers could potentially be ‘first responders’ to the climate and biodiversity emergency.

I have visited some of these EIPs and a recurring theme which I still find shocking is how farmland was designated for nature conservation with little communication with the farmers themselves. Yes they were informed, but they were not allowed appeal any designation unless on scientific grounds. This meant that they had to demonstrate that their land was not ‘dry heath’, ‘orchid-rich grassland’, ‘cladium fens’ or one of the hundred or so ecological assemblages which were pronounced by European scientists to be of ‘community importance’.

To farmers, designation has been a bitter pill that only meant a list of things that could not be done. Many will say that no one ever came to walk their land with them, to tell them why it was special, something the EIPs are only now addressing. Certainly, most see designation as a burden that has devalued their land.

While conversations are happening now that should have happened twenty years ago, the intervening decades have left a residue of resentment that will be hard to shift. Especially so given that the EIPs are small in scale relative not only to the area of farmland in Ireland but also to the scale of the task of addressing the biodiversity crisis.

Although it is a difficult area to confront, there is an odour of colonialism about nature conservation in Ireland. This is most obvious in the history of designation of sites for nature conservation, starting with the displacement of native peoples for the creation of national parks across the Americas, Africa and Asia. While the EU’s Habitats Directive was never intended to physically displace people or traditional land practices, the way it has been implemented: the drawing of lines on maps by distant bureaucrats, the lists of prohibitions, the marginalisation and/or exclusion of local people from decision making, has all the hallmarks of colonialism.

When people who have experienced this dispossession hear of plans for rewilding, more designation of land to meet global targets or the idea of ‘carbon farming’ (and the coupled idea of payments for carbon credits that they may or may not own themselves), it is small wonder that there is suspicion and pushback.

Recently, at an event in the Blackstairs Mountains in Co. Carlow, I was among a group who heard from farmers about their frustration of working inside an upland SAC and not being allowed to do controlled burning. This is something that can only be done outside the bird nesting season (September to February when weather conditions rarely allow) and with various departmental permissions (all kinds of burning should be done away with but that’s another blog post). Meanwhile they see land that is literally beside them under Coillte plantation forestry where clear-felling is permitted at any time of the year. To them, this is an inherent unfairness. Why are government agencies exempt from rules that are strictly enforced when it comes to farm practices?

The EIPs show us one way that we can decolonise conservation. We can centre local people, put them in the driving seat while providing them with the scientific and administrative support so that public money actually delivers the public goods that we should expect. But we also need to see the state take the lead. If Ireland really is to take the biodiversity and climate crisis seriously, we will need many more EIPs but we also need to see state bodies, like Coillte and the OPW, taking drastic action to address their negative ecological impacts.