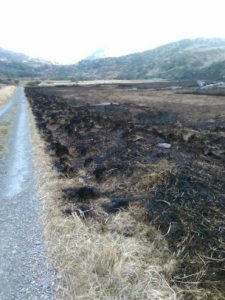 Minister for Arts, Heritage and the Gaeltacht, Heather Humphreys appeared clueless and unaware of her responsibilities in an interview with Radio Kerry this morning (April 23rd). She maintained that fires were not an issue for her staff except where it occurred in Killarney National Park. She seemed totally unaware that fires also occurred in Wicklow National Park while many of the upland areas that have been scorched in recent weeks are within Special Areas of Conservation and Special Protection Areas. These are our most important biodiversity areas and are managed by the National Parks and Wildlife Service, an agency within the Minister’s department.

When interviewer Jerry O’Sullivan pressed her on what was to be done prevent future fires, and whether nothing had been done to prevent the current spate of infernos, she simply repeated over and over that fires are a bad thing that that land-owners have responsibilities.

The IWT Campaign Officer Pádraic Fogarty says “this is totally unacceptable from the Minister who seems blissfully unaware of her duties to protect areas of European importance for wildlife. Extensive and devastating fires have raged through the country in the past few weeks, destroying all before their path, and Heather Humphreys seems clueless in her lack of response”.

The IWT believes that wild fires will only come under control when the Department of Agriculture stops single farm payments to those responsible. Upland habitats are being degraded at an alarming rate and it is disheartening to see those in authority shrugging their shoulders or looking the other way.