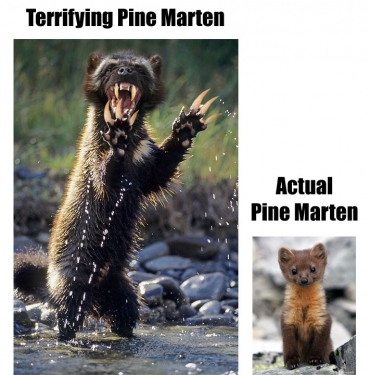 The Irish Wildlife Trust (IWT) condemns the call by Athlone Municipal District Council to de-list the Pine Marten as a protected species. The Pine Marten is a cat-sized carnivore which feeds predominantly on berries and invertebrates. Having been nearly wiped out during the 20th century, its return to nearly every county in Ireland is one of our great conservation success stories. This success should be celebrated and it is unfortunate that some see our natural heritage as little more than vermin which must be ‘controlled’. There is currently no good reason to remove protection for the Pine Marten.
IWT Campaigns Officer, Pádraic Fogarty says: “at a time when wildlife across Ireland is under such tremendous pressure it is sad and dismaying that such little tolerance is being shown by the members of Athlone Municipal District Council. We cannot have a situation where shooting our wildlife is out of control to the detriment of long-term conservation. The Pine Marten is not only a beautiful animal but an important part of countryside ecosystems.”
The IWT will continue to resist any move to weaken legal protections for the Pine Marten.
END