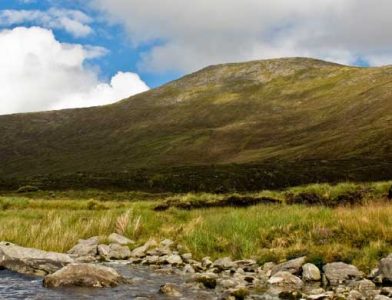 The Irish Wildlife Trust (IWT) warmly welcomes the announcement by the new Minister for Culture, Heritage and the Gaeltacht, Josepha Madigan, that Ballycroy National Park in Co. Mayo is to be significantly expanded. This creates an enormous opportunity to enhance habitats for wild plants and animals while boosting local engagement with the natural environment. The IWT particularly welcomes the commitment from the Minister that the National Park will be managed to “the highest standards of nature conservation”[1]. Although declared a National Park as long ago as 1998, a management plan has never been prepared for Ballycroy. Indeed, none of the six National Parks in Ireland are conserved under current management plans and only for two (Killarney NP and Wicklow Mountains NP) were any plans ever prepared (both of which are now long out of date).

IWT Campaigns Officer Pádraic Fogarty says “It’s really great to see our National Park system expanded in this way, something which affords amazing opportunities for both people and wildlife. However, to realise these opportunities announcements must be backed up by investment and management. The National Parks and Wildlife Service is currently chronically underfunded, being awarded only €13.5 million in 2015 (the most recent available figures). When compared to the fact that taxpayers gave the ‘horse and greyhound racing fund’ a whopping €74 million in 2016 it unfortunately shows the low priority given to our natural environment.”

The so-called ‘Wild Nephin wilderness’ project was launched in 2013. As part of this the state forestry company, Coillte, promised to cease forestry operations and return the land to nature. However, this did not happen and business as usual continued. Sometimes in Ireland the ministerial press release signals the culmination of initiatives and not the beginning. The IWT hopes that statements on the newly expanded Ballycroy National Park do not follow the same pattern. END