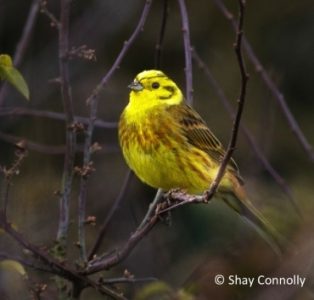 No to More Slash & BurnThe Irish Wildlife Trust, Birdwatch Ireland, An Taisce, and the Hedge Laying Association of Ireland highlight that the proposed changes to Section 40 of the Wildlife Act contained in the Heritage Bill 2016 are unjustified and damaging to natural heritage.

Now the Bill is in the Seanad for debate this Wednesday 9th November.

It is time to TAKE ACTION to protect wildlife.

Sign the petition here No to More Slash & Burn

We are asking you to write or email a Senator to highlight your concerns about this Bill’s impact on the Wildlife Act. Our only hope is if Senators support the amendments we will be proposing to remove or alter Part 3 Section 8 of Heritage Bill 2016 and so prevent these destructive changes to the Wildlife Act.

The Minister is proposing a two-year pilot law with a rollover clause, which would allow cutting, destroying and removal of hedgerows in August and burning in the uplands in March. During these month birds are trying to lay eggs and raise chicks and other wildlife such as bees and hedgehogs are still dependent on these ecosystems.

Strong data already exists showing that birdsare nesting during August and March, however there is a severe lack of scientific data to suggest that these changes to the Wildlife Act would not have a disastrous effect on wildlife, including wild bees and threatened birds such as yellowhammer and curlew. Significant research over at least 3 years would be needed before the proposed changes can be safely made introduced.

In addition, a reason this Bill has been proposed is to allow for cutting of hedgerows in August for road safety reason but there already exists legal exemptions to the Wildlife Act to allow cutting where there are road safety issues.

In summary, the changes to the Wildlife Act proposed in the Part 3 Section 8Heritage Bill 2016 are not supported by scientific data and do not improve the laws on road safety.

Here is a link to our 31 reason why hedgecutting in August is very bad idea.

TIPS for contacting Senators before the morning of 09th Nov

· Mention our petition representing over 23,000 other people’s concerns

· Why not finish on a positive note expressing that what is needed is a real heritage bill, backed up by good Irish data

1. Section 40 of the Wildlife Act already includes provisions to allow local authorities to cut where there are road safety issues.

2. Yellowhammer, Linnet and Greenfinch nest well into September and therefore hedgecutting could justifiably be restricted until mid-September.

3.Curlew and other upland breeding birds will have begun their nesting activities in March and will therefore be impacted by these changes.

4. Other wildlife which will be impacted include hedgehogs, bees, butterflies and other invertebrates which rely on hedgerow flowers for food.

5. There are already 6 months of the year when landowners can cut hedgerows and burn vegetation. Adding one more month could push some Red-listed species over the edge towards extinction in Ireland (e.g. Yellowhammer, Curlew).

6. Further research is needed into the effect on wildife of burning uplands in March and cutting hedgerows in August before these changes can be safely put in place.