PRESS RELEASE: Increasing pesticide use presents a threat to wildlife and human health

PRESS RELEASE: Increasing pesticide use presents a threat to wildlife and human health

New figures from the Department of Agriculture, Food and the Marine show that pesticide use in Ireland continues to increase, amounting to 3,135 tonnes of active ingredient in 2016 [1]. This is an increase of 14 tonnes on the previous year, and 219 tonnes greater then in 2013 – the year in which the ‘Origin Green’ marketing initiative was launched by An Bord Bia. In fact, pesticide use has increased every year since the advertising campaign started. 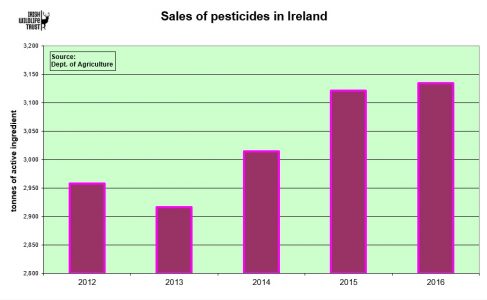 Pesticide sprays, which include herbicides, fungicides, insecticides and other industrial chemicals, are among the leading causes in the decline of pollinating insects and are implicated in a collapse of insect and invertebrate populations generally. They are also known as a pollutant in water courses – presenting not only a threat to aquatic life but also human health. A 2015 report from the Environmental Protection Agency identified pesticides as ‘a significant water quality issue’ that year [2]. This report highlighted how 61 drinking water supplies failed drinking water limits that year, a leap from 28 from the year before.
IWT Campaign Officer, Pádraic Fogarty, says: “the ever-increasing tide of chemical sprays which are used in agriculture is driven by government expansion plans and shows that ‘Origin Green’ has been no more than marketing spin. Our natural heritage, and the healthy environment we once enjoyed, is paying a heavy price for this unsustainable trend”.
The IWT has previously called for the Origin Green marketing campaign to be scrapped, and these new figures show that it is no more than hollow slogans – funded at great expense by the taxpayer. Irish food production could, and should, be nature-friendly, but this will require a dramatic rethink of volume-based expansion plans.  END
[1]  http://www.pcs.agriculture.gov.ie/sud/pesticidestatistics/
[2] EPA. 2016. Drinking Water Report for Public Water Supplies in 2015.
CONTACT:  Padraic Fogarty – IWT’s Campaigns Officer – irishwildlife@iwt.ie for further details
Tweet
Share277
Pin1
278 Shares
Previous Post Irish Wildlife Trust calls for payments to be made to farmers for not farming Next Post People for Bees in Blessington