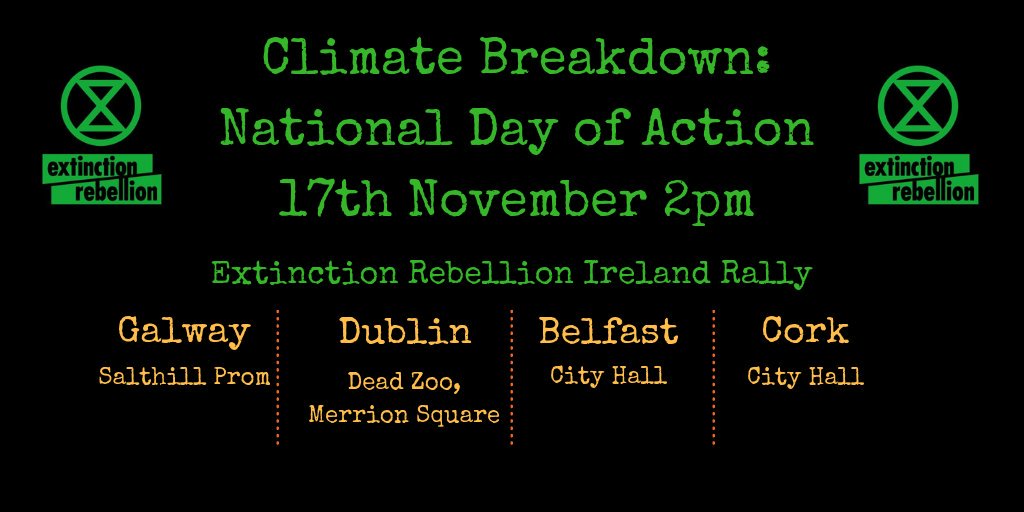 The Irish Wildlife Trust (IWT) is urging people to attend events around Ireland to protest the lack of action in the face of planetary ecological collapse. Events will be held in Dublin, Cork, Galway and Belfast at 2pm in what is planned to be a family-friendly but vocal expression of outrage and dismay at the lack of political action to prevent a mass extinction of life on Earth. Last month a shocking report from the World Wildlife Fund and the Zoological Society of London showed how 60% of the world’s large animals have disappeared since the 1970s. Meanwhile the UN’s Intergovernmental Panel on Climate Change have told us that there may only 12 years remaining where meaningful action can be taken to avert dangerous climate breakdown.

IWT Campaigns Officer, Pádraic Fogarty, says: “The world around us is dying. It’s vital for Irish people to know that the extinction crisis is not something that’s far away but is right here on our doorstep. Our seas and rivers are being emptied of fish, we have lost our bogs and forests and even our farmland has become a nature-free zone. We can’t address this crisis without political action at the highest level and our current government has failed spectacularly in this task. Extinction has already seen a loss of heritage and livelihood in Ireland and there are huge opportunities for us all were we to bring nature back.”