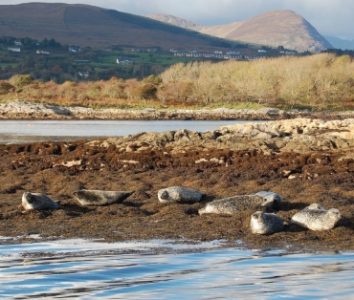 Pair trawling is a fishing practice involving two boats dragging between them a single large net with small meshing. It is an activity which has lately been going on in sheltered inshore bays and estuaries along the west coast – many of which are protected for nature conservation  (eg Kenmare Bay). Pair trawling targets sprat which goes on to be processed into fish meal. Sprat is a small fish which forms large shoals and is a keystone of the marine ecosystem being food for larger fish such as cod, as well as sea birds. Not only does pair trawling sieve the water of food for other marine life, it also has the potential to catch seals, dolphins or anything else in its path such as migrating salmon or juvenile sea bass.
IWT campaign officer Pádraic Fogarty says “catching sprat to be ground up for fish meal is insane. It’s a wanton destruction of the whole marine ecosystem, frequency in areas which are supposed to be protected for wildlife.”
Large fishmeal plants (both constructed and planned) operate in the expectation that boarfish (a small fish unexploited until recently) would provide the raw materials. However boarfish catches have declined sharply in recent years so there is significant pressure to find replacement feed. It is important therefore that this practice is prohibited in order to preserve coastal areas for marine life and other users who depend on the resource. The practice highlights the unsustainable nature of fish farming at sea, which relies on the wasteful use of wild caught fish for feed. END
CONTACT:  Padraic Fogarty – IWT’s Campaigns Officer for further details – irishwildlife@iwt.ie
Photo: Seals in Kenmare Bay
Tweet
Share3
Pin
3 Shares
Previous Post Where’s the ‘Wild’ in Wild Nephin? Next Post Independent observers on board supertrawlers