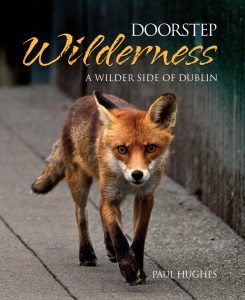 A Wilder Side of Dublin is a book by Paul Hughes, a full-time photographer and member of the Irish Wildlife Trust and Birdwatch Ireland. It details the life of a stretch of the River Dodder, mostly between Ballsbridge and the railway bridge at Lansdowne Station, between the spring of 2008 and summer 2012. The text is accompanied by stunning photos taken by the author, which highlight the wildlife dramas taking place on a stretch of wilderness familiar to any Dubliner who has made his or her way from the DART to the RDS in Ballsbridge.

Most Dubliners would be amazed at the amount of wildlife which can be seen on this stretch of river in the middle of such an urban environment. For example, a family of foxes made their home along the riverbank, and most of the action in the book centres around the success of the parent foxes in rearing their young. However, as well as foxes, Paul Hughes also encountered a wide variety of birds such as swans, ducks, herons, kingfishers, moorhens, seagulls and song birds like blackbirds, thrushes, tits and finches. Surprising visitors also appeared along the urban river such as otters, sparrowhawks and a badger. It was also a surprise to learn that trout and salmon live in the Dodder and that the river is tidal as far as Landsdowne Road. As such, it is a favourite spot for the fish to linger for a while to accustom themselves to freshwater.
Much of the book documents in vivid photos the constant battle for survival taking place all along the river. For birds such as ducks and moorhens, raising their young means eternal vigilance against the foxes, crows, magpies and seagulls, that are waiting to pounce on any chick that strays too far from its mother. The author documents various encounters between predator and prey and is not afraid to show potentially upsetting pictures such as a hooded crow grasping an unfortunate chick by the head, just before it swallows it whole. However, we are also cheered by the sight of a courageous mallard successfully taking on a seagull, and see the moment captured when the gull is forced to drop the unharmed chick in mid air. There are also lots of very cute photos showing the young fox cubs learning the ropes, playing together and finding their way in the world. The book is also full of interesting facts. For example, the vixen will bury food close to the den to give the cubs some practice at finding it, and that kingfishers will always swallow the fish they catch headfirst to avoid the scales sticking in their throat.
All in all the book is a vivid reminder of the huge variety of wildlife to be found on our doorstep, and is a testament to the sheer dedication and patience of the author in waiting, sometimes for days, to get that perfect shot. Highly recommended.
Doorstep Wilderness – A Wilder Side of Dublin is published by Collins Press and is available for €24.99. www.collinspress.ie
Niall Mac Coitir
IWT Dublin Branch
Tweet
Share
Pin
0 Shares
Previous Post Wild Watch Events 2014 Next Post A Wilder Side of Dublin