I’ve never particularly liked the term ‘wilderness’. Although it is instantly evocative it carries so much colonialist baggage that I think it best avoided, regardless of whether you think it even exists or not (for background on this I can recommend this important essay by William Cronon).

These days many feel the same way about rewilding. Yes, it’s also evocative but it too seems to carry a baggage that has arisen from cross-contamination with ideas of ‘wilderness’. Many people seem to see the instant value of rewilding but there are also those who feel that the word is too provocative, too closely associated with wolves and large predators, and too triggering for farmers in particular. So, best to avoid it.

The science behind rewilding is growing apace and so the accusation that the word is so flaky that it has no real meaning or use in applied ecology no long holds up. Nevertheless, as a new report from SCOTLAND: The Big Picture points out, for rewilding to succeed it will need to appeal to people’s hearts and minds, regardless of how established the science is. For the organisation’s director, Peter Cairns, “those seeking to drive change have spent decades speaking to the head, when they should be speaking to the heart”.

The report, ‘HEARTS & MINDS. An assessment of the social and cultural barriers to rewilding in Scotland’ (which can be downloaded here) brings forth no new information but it is set out in way that helps to see through the fog of what we are trying to achieve, and how we might achieve it. 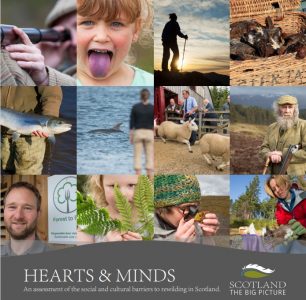 Rewilding, which they define as “an evolving process of nature recovery that leads to restored ecosystem health, function and completeness” is a word that we should not try to tie down too much. Arguing over what is or isn’t rewilding is not useful the author contends, and those who insist on sticking within its original meaning (core, corridors, carnivores) have already lost this battle and should come up with a new word or term if they want to stay strictly within these parameters.

At the same time the author chides those who shy away from the word, such as NatureScot (the equivalent of the National Parks and Wildlife Service in Scotland) and the Caringorms Connects project which seeks to “enhance” ecological processes over a 60,000 hectare expanse (but is not rewilding and keeps mention of predators at barge pole’s length).

These bodies have decided that rewilding is too associated with wolves and talk of wolves is alienating to some, so they have decided not to use the word. But watering down ideas to make them palatable whiffs of intellectual cowardice (my assessment, not the author’s) while the report recommends that conservation organisations “be bolder in advocating the benefits of rewilding, and more proactive in pursuing the consultations, community buy-in and (where necessary) research needed to expedite rewilding action.” They point to the on-going work exploring the reintroduction of lynx to Scotland.

It seems hard to imagine that rewilding, even as a word, is about to go away any time soon. A 2021 poll in Scotland found that 75% of Scots supported the idea of “large-scale restoration of nature to the point it’s allowed to take care of itself” with only 7% opposing it. Surveys have also found that resistance, sometime vocal, to rewilding from farming or countryside sports organisations is not necessarily reflected among their membership. The example of Ireland’s reintroduction of white-tailed eagles in 2007 was cited; the Irish Farmers’ Association was against the idea but generally farmers on the ground were supportive or ambivalent.

Nevertheless, opposition to rewilding is real and it’s important that proponents listen to, and try to understand, the concerns. In Ireland, the vast majority of farmers work within the framework of the Common Agricultural Policy, and the payment subsidies that go with that. It is understandable that farmers’ attitudes to rewilding will depend upon how any policy promotion of it will affect their income. But it would also be wrong to say that this is simply about paying farmers to not farm in certain areas so we need to avoid falling entirely on an economic rationale.

The SCOTLAND: The Big Picture report highlights how local attitudes are framed by control, the perception, for instance, that people in far away places want to take control of their land. The word rewilding is also perceived to contain an implicit criticism that farmers have been doing it all wrong. Author and farmer Patrick Laurie is quoted as saying that agri-environment schemes down the years have “served as a masterclass in how to alienate farmers from the natural world. Farmers were blamed for creating problems, then disempowered from fixing them.”

Dismissing landscapes as ‘wet deserts’ or ‘sheep wrecked’, while insisting that tourism is an easy substitute for lost farming income, alienates farmers. The report also points out that farmers have always taken pride in maximising production (which has also been the over-rising preoccupation of state agencies) so asking them to deliberately produce less seems ridiculous.

The report suggests that it will (at the least) be necessary to demonstrate the economics of rewilding while proponents need to be honest about potential negative impacts upon landowners, e.g. through the reintroduction of predators. We also need to be honest about our motivations for bringing back wolves and lynx and suggesting they will automatically regulate deer in our highly modified landscapes is not so straight forward.

Throughout the report the lists of barriers to implementing rewilding are long, but there is also substantial common ground among the various interest groups. There is growing recognition among farmers and the wider public that climate change and biodiversity loss are serious problems that need to be addressed. Many farmers are already taking action to encourage more nature onto their farms. This may not be rewilding but it is a welcome challenge to the strictly productivist mindset that, let’s face it, has been environmentally ruinous.

The debate around rewilding neatly encapsulates our dysfunctional relationship with nature and, for me, that is one of the reasons why we should stick with the word. Many of the criticisms are, in fact, applicable to the disastrous way ‘nature conservation’ has been done in the past and it’s vital that these be addressed (in particular by giving landowners and local communities more power over decisions that affect them).

The long-standing view of the Irish Wildlife Trust has been that farmers should be given the option to rewild some, or all, of their land and be paid for it. Farmers who want to continue farming should be offered high nature value schemes so that environmental protection is built into programmes no matter the final outcome. This approach needs to apply across the country, not just west of the River Shannon. We also believe that the state needs to lead the way by rewilding public land.

Hugh Webster, author of the SCOTLAND: Big Picture report, also cautions against proponents over-relying on utilitarian arguments for rewilding. He calls for us to “appeal to, and promote, the simple wonder and joy of healthy natural ecosystems” and to “reawaken our emotional and spiritual connection with nature”. I think that is something we can all support, no matter what you want to call it.