The Irish Wildlife Trust (IWT) welcomes the recent ruling from Judge Gráinne Malone at Navan District Court (13th January last) in which Mr. Richard Douglas, a cattle farmer from Rathmoylan, Co Meath, appeared on a summons relating to the destruction of 800 meters of hedgerows during the bird nesting season. The case was taken against Mr. Douglas by the National Parks & Wildlife Service (NPWS) Conservation Ranger Kieran Buckley. Mr. Douglas pleaded guilty to the offense 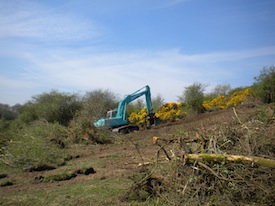 and admitted that on the 22nd of April 2015 he destroyed hedgerows and part of a woodland during the bird nesting season. When passing sentence the judge told the defense solicitor she would be inclined to impose a criminal conviction on Mr. Douglas in view of the significance of the destruction and given the evidence presented to the court by the NPWS of the impact this destruction had on nesting birds. However based on his guilty plea she ordered that Mr. Douglas pay a total of €3,500 to two wildlife conservation charities – €2,000 to the Butterfly Conservation Ireland and €1,500 to the IWT. This is believed to be the largest fine imposed for such an offense.

IWT Campaigns Officer Pádraic Fogarty says: “we would like to thank the NPWS for their work in securing this ruling which emphasises the importance of protecting wildlife during the breeding season. This is a significant fine and will hopefully send the message that regulations on the timing of hedge-cutting will be rigorously enforced.”
END