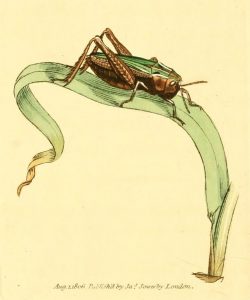 The British miscellany
London: Printed by R. Taylor & Co., and sold by the author, J. Sowerby by White, Johnson, Symonds, and all other booksellers,1806.
http://biodiversitylibrary.org/item/91785

The common green grasshopper is a grasshopper of the Acrididae family. It is found in moderately wet regions of Europe and is distributed widely across Britain. Its range extends as far as Siberia and Mongolia. In Ireland it tends to be found in areas with long grass, such as farmland, grassland, heathland and upland.

The common green grasshopper is usually green all over, but some may have brown colouration on their sides. The eyes are either brown or yellow. The typical body length of the insect is 17 – 20 mm.

The life cycle of the common green grasshopper begins with the females laying their eggs in the top layer of soil, or near the root of grass stalks. The young (nymphs) emerge in April. Nymphs resemble their parents but have immature wings. After about a month of moulting their exoskeleton several times, the nymphs mature into adults with functional wings. The insects are usually seen between April and October.

The common green grasshopper can be identified by its song. The grasshopper’s characteristic loud, long song, which resembles “ticking”, lasts 20 seconds or more. During mating season, males may also make a “churring” noise, which is made by the grasshopper rubbing its legs against its wings. This is to attract and find a mate. Females which are ready to mate may also “sing” in response.
Common green grasshoppers are a food source for many animals, including bats, birds and amphibians.