Species of the week: Long-eared Owl 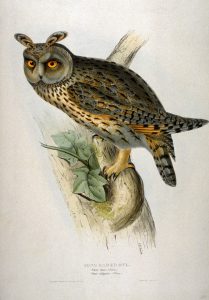 The Long-eared Owl is distributed all across Ireland often found in coniferous woodlands with open grasslands nearby in order to hunt their prey. While they can be found distributed over most if the country except for the west, their range is somewhat scattered due to the low levels of forest in the countryside. Long-eared owls can be found across the globe and are widespread in Europe, Asia and North America. They get their name from the obvious two tufts of feathers on the top of its head which serve to make the owl look larger; these are for display purposes only have association with hearing. They are erect when it is alarmed or focussed and are flat when it is relaxed or flying.

Long-eared Owls have evolved to be excellent nocturnal predators. Like other owls, they remain completely silent when flying. Their flight feathers don’t project sound and their soft downy feathers absorb it, so an owl can fly inches above their prey without being detected. The Long-eared Owls face is also shaped into two large disks that capture sound like radar dishes and their ears are positioned in different places on their head, one higher and one lower. This asymmetry helps them more precisely locate their prey in the darkness. Their prey consists of small mammals like mice, rats, shrews and voles. And other various small animals like frogs, insects and birds. They swallow their prey whole and then regurgitate the leftover indigestible pieces. These are knowns as pellets and can contain bones, fur, feathers, teeth and any other animal part that the owl can’t digest.

Long-eared Owls don’t construct their own nests. They repurpose the abandoned old stick nests of ravens, magpies, sparrowhawks and sometimes squirrels’ dreys. A male and a female will breed between February and July with the female staying with the eggs and chicks all day and only taking a few breaks at night. The male hunts and brings food to the female and chicks until the brood are independent. The chicks still can’t fly when they leave the nest and instead walk out onto neighbouring branches. Their parents will provide for them until they become fledglings and learn to fly and fend for themselves.