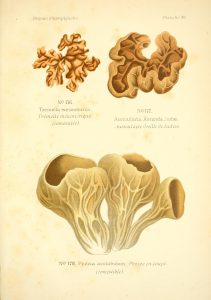 Tremella mesenterica is usually golden yellow and gelatinous but tough when damp, turning orange and shrivelling to a tiny fraction of its former size during very dry weather. Initially disc-like, the fruitbody soon develops irregular contortions only very vaguely resembling the structure of a brain. Individual fruitbodies grow to between 20 and 80mm across.

The spore print is white. Sexual reproduction is by basidiospores. The basidia are broadly ellipsoidal, smooth, cruciately septate (divided by walls into four compartments so that seen from the top they look rather like ‘hot cross buns’). The basidiospores are 7-16 x 6-10µm

Yellow Brain Fungus, is mainly seen in winter, when it appears on fallen branches of deciduous trees. It grows on dead timber from all kinds of broad-leaf trees, but it is particularly common on fallen branches of birch and hazel. Very often (although easily overlooked) this colourful jelly fungus occurs also on decaying gorse wood.

It is not the dead timber that Tremella mesenterica feeds upon but crust fungi that themselves have been feeding on the wood. Yellow Brain must therefore be classed as a parasitic rather than saprobic species.