The Government at COP15

The Government at COP15

COP15, being held in Montreal, Canada, is the biggest, most important event for biodiversity in over a decade. The previous one of this magnitude, held in Aichi Prefecture, Japan, was the last to produce an overarching agreement among the world’s countries to stop the loss of species and habitats. Not a single one of the goals agreed at that meeting were achieved.

We are now running out of time. Merely stopping the loss of biodiversity is no longer sufficient, we must move to full restoration mode. An optimistic outcome for the deal, to be agreed by December 19th, will see stronger targets in place on everything from the size of protected areas, nutrient run-off and pesticide use, sustainable land use and the ownership of genetic resources. It would give us a goal (or a series of goals) that we can aim for, along the lines of the 1.5˚C temperature limit for climate, thereby giving us a ‘Paris Agreement’ for nature.

But the omens are not good. Repeated delays, a change of venue, political animosity between China (chairing the event) and the Canadian hosts, no world leaders and still so many areas of agreement to be ironed out that the text has been described as “a mess”. Outside the conference hall, nature – the life support system upon which we all depend – struggles to get a hearing. But succeed we must.

For the first time in 20 years the Irish government will be represented at a biodiversity COP by a minister, the Green Party’s Malcolm Noonan. But here too the omens are poor. His attendance in the Dáil is needed on Saturday the 17th to vote in Leo Varadkar as taoiseach, thereby missing the final (and critical) days of the conference. Then, a non-confidence motion tabled by People Before Profit, and scheduled for the evening of Tuesday 13th, means the minister’s visit is truncated further, giving him no more than 36 hours at the event. That this motion was timed to coincide with COP shows how far removed many politicians are from the biodiversity emergency. 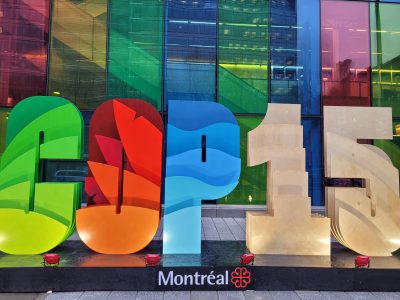 Noonan will lead a team of officials here in Montreal that has spring in its step. Many of the officials are reinvigorated by ministerial support, something that’s vital for credibility in negotiating rooms. While Ireland is small, we have shown in other arenas that we can make a difference on the world stage. We have an excellent international reputation and a long history of engagement with the UN.

Yet, this cannot mask a growing credibility gap. Ireland, along with a hundred other countries, has signed up to a ‘High Ambition Coalition’, spearheaded by Costa Rica and France, which aims to champion “a global deal for nature and people with the central goal of protecting at least 30 percent of the world’s land and ocean by 2030”. Yet, we have somehow managed to sign up to this group despite having not, in fact, committed to this goal. While protecting 30% of sea by 2030 is government policy, there has been no commitment to protect 30% of land – the minimum scientists say is needed if we are to prevent the global collapse of natural ecosystems. When this is pointed out the defence is that the EU has signed up to the 30×30 target, as it’s known, not necessarily individual countries.

But this approach is beginning to look like a pattern. In 2015, then-taoiseach Enda Kenny, went to the Paris climate COP where he told the world that “Ireland is prepared to play its part”, before later briefing Irish media that reducing greenhouse gas emissions was “unrealistic”. Then we have current taoiseach, Micheál Martin, attending the climate COP in Glasgow in 2021, and signing up to an agreement to cut methane emissions by 30%. This week, The Sunday Business Post reported that government sources believe this is “not feasible”.

And who knew that Ireland is a signed-up member of the ‘Agro-Ecology Coalition’? It describes itself as “A coalition for food systems’ transformation through agroecology”. Among the commitments the signatories make are: “strengthening the consistency of the various sectoral policies aiming at the agroecological transformation of food systems, including agricultural, forestry, fisheries, environmental, water, energy, health and trade policies”.

Yes, Ireland, where extinction and pollution from agriculture are increasing has put its name to this document. Does Minister for Agriculture, Charlie McConalogue, know we’re a member? McConalogue has also cast doubt on Ireland’s support for the EU’s proposed Nature Restoration Law and recently opposed the banning of bottom trawling in protected areas in the Atlantic. Yes, the same minister who announced in 2021 that Ireland would be a “world leader” in sustainable food production.

It’s not only Ireland. At the opening ceremony for COP15, Canadian prime minister Justin Trudeau was heckled by indigenous peoples who are dealing with toxic waste from oil sands extraction in Alberta while, incredibly, logging of old growth forests in British Columbia still takes place. At an event here on Thursday, on Marine Protected Areas (MPAs) in the EU, I challenged a Spanish minister who was telling the audience that Spain strictly follows science when it comes to managing MPAs and that the country is on target to meet marine conservation goals. Only in September, the Spanish minister, Luis Planes, strongly objected to the EU measure banning bottom trawling in MPAs (as per McConalogue) in the North Atlantic, including some in Irish waters. The hypocrisy and double speak are rife.

Ireland s should not focus on being a world leader in nature conservation, or sustainable food production for that matter. Couch potatoes don’t get to say they’re training for Olympic gold. Malcom Noonan’s presence in Montreal for COP15 is welcome and can make a difference to negotiations on the ground. But please don’t sign Ireland up for promises we have no intention of keeping.