The left is right

The left is right

The emergence of a ‘left-green’ conversation in Ireland seems to have gone unnoticed in the mainstream media. Its most notable figures inside the Oireachtas are Neasa Hourigan, Green Party TD for Dublin Central, Bríd Smith in People Before Profit, Alice-Mary Higgins (Ind) and Lynn Boylan of Sinn Féin. The Social Democrats, with its roots in the Labour Party, are also in this space and enjoyed success in this year’s general election and were notable as the first political party in Ireland to ever produce a standalone biodiversity policy document.

Outside the Dáil and Seanad, the ‘Just Transition Greens’, a group which seems to be mostly made up of disillusioned ex-Green Party members, is a welcome addition to the stage, bringing a much-needed focus on housing and workers’ rights alongside climate action.

The call for ‘climate justice’ resonates predominantly with those of a left political leaning. The phrase has been a rallying cry of former President Mary Robinson since becoming a global champion of climate action (she was elected to the presidency in 1990 as a Labour Party nominee). And proper order; this week Oxfam released a study showing that the richest 1% of people are responsible for more than twice the total emissions from the 3.1 billion who make up the poorest half of humanity. This is not far off the situation in Ireland, where the richest 10% emit as much carbon as the lowest-earning 50%.

The rise of Alexandria Ocasio Cortes in the US has done much to weld the issues of environmental action to inequality and, despite the failure of Bernie Sanders to clinch the Democratic nomination in the upcoming election there, even Joe Biden – heretofore condemned by the leftists as too centrist – is now talking about ‘climate justice’. His website heralds “the Biden Plan for a Clean Energy Revolution and Environmental Justice”. Is it now mandatory to be a left voter if you, like me, feel that environmental issues are the most important facing our society?

Let’s ask the question from the other direction: is it possible to believe that the parties of the centre-right will ever take climate and biodiversity issues seriously? The answer to this must surely be: no. The story of economic liberalism, which parties like Fianna Fáil and Fine Gael were weaned off, has no place for nature. ‘Natural resources’ are simply there to be exploited and converted into economic growth and jobs. Many in society have bought into this over the years as the ideology has indeed brought personal prosperity to many. But the fact that dealing with the ecological crisis occupies no space whatever in their mental framework is reflected in the viewpoints of the economists to which they defer (side note: the Climate Change Advisory Council, established in 2015 by Fine Gael, has 11 members, 9 of whom are economists or graduated with an economics qualification (side side note: only two are women!)).

The coterie of Irish economists who enjoy prominence on our airwaves and print media, and who normally have lots to say about everything, are by and large struck dumb about the threat to our civilisation posed by the collapse of ecosystems and runaway global heating. Modern capitalism has a total disregard for non-human life or natural systems which have sustained our civilisation for millennia, merely acknowledging its destruction as an ‘externality’ – i.e. something not worthy of being a part of the more important business of growing the economy. This type of capitalism, also known as ‘neoliberalism’, also has no time for the less well off, marginalised or indigenous peoples of the world. Covid 19 is feeding off existing inequality; for the first time in 30 years poverty is rising. In Ireland the pandemic has disproportionately impacted the young. It is not hard to see why people are now looking to the left for comfort in the face of this onslaught. 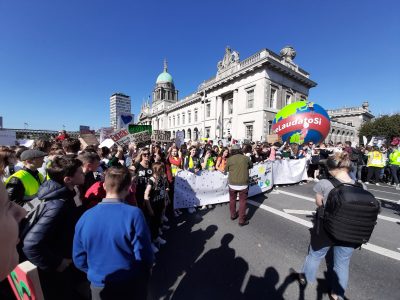 This time last year, I marched through the streets of Dublin with my daughter and my niece as part of the ‘Fridays For Future’ global school strike inspired by Gretta Thunberg. It drew an enormous crowd in glorious autumn sunshine. My eyes may even have dampened somewhat at the sight of so many young people shouting the things I have felt like shouting for years. But this has not translated into political action. A poll published last week by Politiceir said that a whopping 50% of 18-34 year olds support Sinn Féin. A mere 4% backed the Green Party. Why has the greatest youth movement of our generation not been attracted to the one political party that has been championing their cause for 40 years? Evidently young people are more concerned about their education, their prospects in a low wage workforce and where they’re going to live than reducing our greenhouse gases. Who’d blame them?

But where are the left parties in dealing with our ecological issues? Will older, green-minded voters who have traditionally voted for one of the centre-right parties turn to them for a new home? In the run-up to the general election in March of this year, the One Future coalition of environmental groups rated all of the political parties’ manifestos on climate action. The Green Party, who see themselves as ‘left’ but are in government with the two centre-right parties, unsurprisingly, came out on top. People Before Profit did well, scoring a C, followed by Labour (D) but with Sinn Féin flunking it with the Social Democrats (E). The champions of free-market economics, Fianna Fáil and Fine Gael, with an F, did worst of all. An Irish Wildlife Trust analysis of the parties’ biodiversity policies at the time, found that Sinn Féin and Fine Gael were bottom of the heap, showing little ambition and/or poor understanding of the issues. 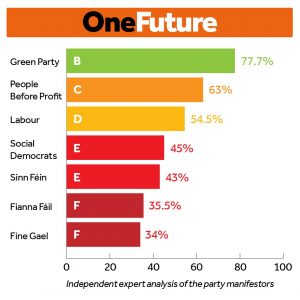 Sinn Féin would be well placed to further mop up the votes of the youth and disillusioned Greens were they to place greenery at the heart of their unified socialist republic. But there’s no sign of this happening. I have rarely heard Mary-Lou Mc Donald mention the climate crisis and have never heard her use the word ‘biodiversity’. Lest we forget, socialist economies (or even democratic socialist societies like in Scandinavia) are built on foundations of extractivism just like the neoliberal ones. The communists ravaged nature with no less gusto than the capitalists. China and India – with their alternative systems – are both oppressed with the most serious environmental problems from poisoned air and water to fast-degrading agricultural lands.

Private sector innovation, particularly in small businesses, is the life blood of any economy and should thrive. Capitalism, in its defence, excelled itself in producing affordable conveniences unimaginable to our grandparents’ generation, and which – admit it – we all adore. But it is like a pet that has turned on its owner. Meanwhile, the history of state control of ‘natural resources’ in Ireland, from fossil fuels to fisheries, is abysmal. Under the guardianship of the state our national parks have been allowed to deteriorate to an appalling condition. Just take a visit to the over-grazed and rhododendron-infested oak forests of Killarney.

We’re going to need new political ideas for the times ahead. Ones that will recognise the physical limits of the biosphere and provide greater levels of public participation in planning and other land-use decisions. It must move beyond the old cleavage between left and right and develop a new model of economic management which can encompass ‘de-growth’ (shrinking our use of energy and materials), making space for nature while reducing inequality and providing minimum living standards – especially in health, housing, transport and education. The green-left politicians and civil society groups get that. It has yet to gain traction in the larger parties, especially Sinn Féin. But for now, the left is right.