The Urgency of Rewilding

The Urgency of Rewilding

This week saw two important publications that bring the urgent need for rewilding closer to being accepted at a policy level. While rewilding has gained widespread popular support, policy-makers and even many ecologists have remained sceptical. Part of this has been the lack of a widely accepted definition, accompanied by its morphing into a catch-all term that encompasses everything from reintroducing lost species to planting ‘wild flower’ meadows on public open space. Woolly terms make for poor policy while spreading the term too thinly denies it the scientific basis that is needed if it’s going to make a real difference.

These issues are recognised within the community of ecologists who are keen to see rewilding progress and who are part of a working group within the International Union for the Conservation of Nature (IUCN). They have published a paper on ‘rewilding principles’ which says that rewilding is:

…the process of rebuilding, following major human disturbance, a natural ecosystem by restoring natural processes and the complete or near complete food-web at all trophic levels as a self sustaining and resilient ecosystem using biota that would have been present had the  disturbance not occurred. This will involve a paradigm shift in the relationship between humans and nature. The ultimate goal of rewilding is the restoration of functioning native ecosystems complete with fully occupied trophic levels that are nature-led across a range of landscape scales. Rewilded ecosystems should – where possible – be self-sustaining requiring no or minimum-intervention management (i.e. natura naturans or “nature doing what nature does”), recognising that ecosystems are dynamic and not static.”

This week, the group published a two-page ‘issues brief’ which highlights that:

Rewilded ecosystems can help mitigate climate change by increasing carbon removal from the atmosphere and protect against climate change impacts by reducing soil erosion and flood risk, for example. Rewilded ecosystems can also create socio-economic opportunities for local communities, reduce the effects of and costs associated with environmental hazards (such as flooding), and improve human health and wellbeing by improving access to nature.

The brief is careful to also point out the risks associated with rewilding, in particular how misuse of the concept “risks alienating communities, harming existing biodiversity and undermining confidence in a technique with enormous conservation potential.” Rewilding shouldn’t be seen as unique in this regard; traditional conservation, after all, has alienated local people in Ireland, particularly in rural areas, and (arguably) has done more harm to biodiversity than no conservation at all. It should go without saying that any land use initiative requires local participation and buy-in if it is to succeed in the long term (think not only nature conservation but how wind farms and commercial forestry have also led to alienation of local people in many circumstances).

The IUCN is the premier global organisation for nature conservation and is a first-stop shop for governments and international bodies looking for advice and policy support in this field. The rewilding working group is to present its recent publications to the next IUCN World Congress which meets in France in September. The adoption of rewilding at this level means it can no longer be ignored or dismissed.

I still get the feeling that many in the ecological community here feel that rewilding is not for us. It is either that the word itself is divisive or contentious or that Ireland has somehow broken free of the laws of nature and that the rules of ecology no longer apply. There is a dominant narrative that the best we should aim for are commercial land/sea uses, particularly farming, fishing and forestry, that are nature-friendly – but that allowing nature the time and space to develop on its own terms is neither desirable nor acceptable. It is why the IUCN working group call for a paradigm shift:

…rewilding means transformative change, providing optimism, purpose and motivation for engagement alongside a greater awareness of global ecosystems that are essential for life on the planet. This should lead to a paradigm shift in advocacy and activism for change in political will and help shift ecological baselines towards recovering fully functioning trophic ecosystems, such that society no longer accepts degraded ecosystems and over-exploitation of nature as the baseline for each successive future generation. This change in paradigm will also help to create new sustainable economic opportunities, delivering the best outcomes for nature and people.

That we need fully-functioning ecosystems and maximum recovery of both the abundance and diversity of life has yet to be widely acknowledged in Ireland. It was powerfully underlined this week during the IWT webinar with National Geographic’s Enric Sala where he laid out the science that we need to be setting aside nearly half of the world’s oceans where no fishing or extractive activities of any kind occur. This kind of scale and ambition would, he pointed out, not only protect biodiversity but would also protect ocean carbon and secure marine food supplies. 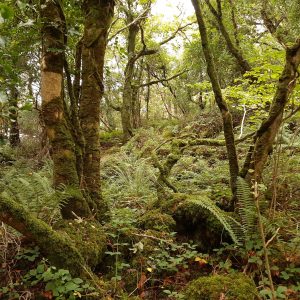 It is the need and urgency of these measures which is currently lacking in the still flaccid debate on nature and the biodiversity emergency in Ireland. We have yet to appreciate the full scale of the challenge and the little time we have to act before we pass irreversible tipping points. Sala told the IWT event that “whatever is not protected by 2030 we have lost”.

This was stressed in the other significant publication of the week, this time from the United Nation’s Environment Programme (UNEP). It launched the decade on ecosystem restoration which demands that 1 billion hectares of degraded land (and a similar area of ocean and coastal zone) be restored by 2030. The report leaves us in no doubt that these targets are not just ‘nice to have’ they are essential if we are to stay within 2 degrees of increased global heating while achieving food security for a still-increasing world population.

Restoration does not necessarily mean only rewilding; the UN report details a number of ways this can be achieved which also includes regenerative agriculture and more established ecological restoration techniques. Rewilding should never be seen as the be-all and end-all, but it’s potential to restore naturally functioning ecosystems is too great to be ignored.

In Ireland, rewilding is already underway on some of the worked-out bogs of the Midlands – but God forbid anyone in official circles would refer to it as such. There also seems to be progress on the much-despised ‘eligibility rules’ that currently penalise farmers for having unmanaged scrub or wetlands. News is that a farmer will be allowed to rewild up to 30% of any land parcel without penalty. But why only 30%? What are we afraid of? We could be rewilding whole landscapes including bogs, native forests and river systems, alongside regenerative and high nature value farming producing healthy food. At sea meanwhile, there is currently nowhere in Irish waters that are off limits to fishing. This has to change.

Time is not on our side, we must embrace rewilding as the cheapest, easiest and most effective way of simultaneously addressing the climate and biodiversity emergency.