The Irish Wildlife Trust opposes the use of badger culling as a technique for Bovine Tuberculosis management in Ireland. We have been campaigning in this area for a over a decade, calling for a stop to the wide scale badger culling being carried out by The Dept of Agriculture in Ireland. See details of some of our work below.

Bovine TB imposes significant economic costs every year on the Irish beef and dairy industry. In 2012 the Irish government spent almost €3,400,000 in its programme to control Bovine TB in the Republic of Ireland.  A national bovine tuberculosis eradication programme was introduced in 1954. Initially progress was rapid and TB incidence was reduced from 17% to less than 0.2%. This reduction was achieved due to the introduction of measures such as testing and tighter controls on cattle movements. However in 1965 progress stalled and the incidence of TB in the national herd has remained at virtually the same level ever since.

TB is an infectious disease that can affect nearly all warm blooded animals. It was discovered in Switzerland in the 1950’s that badgers had contracted the disease from infected cattle. In 1975 the disease was found in Badgers in the UK in the Cotswolds and also in Cork in the same year. The disease can be transferred from cattle to cattle from cattle to badgers and from badgers to cattle.  The transmission route for the disease between badgers and cattle remains unknown. It is also very difficult to quantify the contribution badgers make to TB infection in Irish Cattle. In an effort to discover whether culling badgers could help to cure the disease in cattle scientists in the UK spent a decade culling badgers and recording the results. After spending £50 million and culling 11,000 badgers they came to the conclusion that “badger culling can make no meaningful contribution to cattle control in Britain. Indeed some policies under consideration are likely to make matters worse rather than better”.

Despite these result’s the Irish authorities have culled over 96,000 badgers since 1985. A staggering figure considering that only 70,000 badgers are thought to be found in the whole country to date. This national operation consists of a team of 100 contractors setting up to 6,000 snares a night working 8 months of the year. In 2012 a whopping €3.4 million was spent culling 6,939 badgers. After all this slaughter only 55 fewer cattle were diagnosed with bovine TB compared to 2011. That’s €489 euros per badger or €61,818 for every cow below last year’s figure.

Culling badgers is clearly not working. The Irish Wildlife Trust believes that improvements in testing and the development of a cattle vaccine are the best ways to eliminate this disease just as we did in the human population. Vaccination is also the best way to deal with the disease in badgers. A badger vaccine based on the human BCG has been developed in New Zealand and has been shown to reduce TB in 74-76% of vaccinated badgers. Recent vaccination trials have led to some promising results which indicate that if proper vaccination measures are put in place and controlled, TB can be wiped from badger populations. In the interim we would call on the Irish authorities to stop wasting taxpayer’s money on a system which is unscientific and completely unsustainable in the long run. We should follow the lead of the authorities in Northern Ireland and Wales who have committed to vaccination.  Vaccination with oral bait will cost less than culling and will cure the disease in the badger population in the long run. That is something snaring can never achieve. 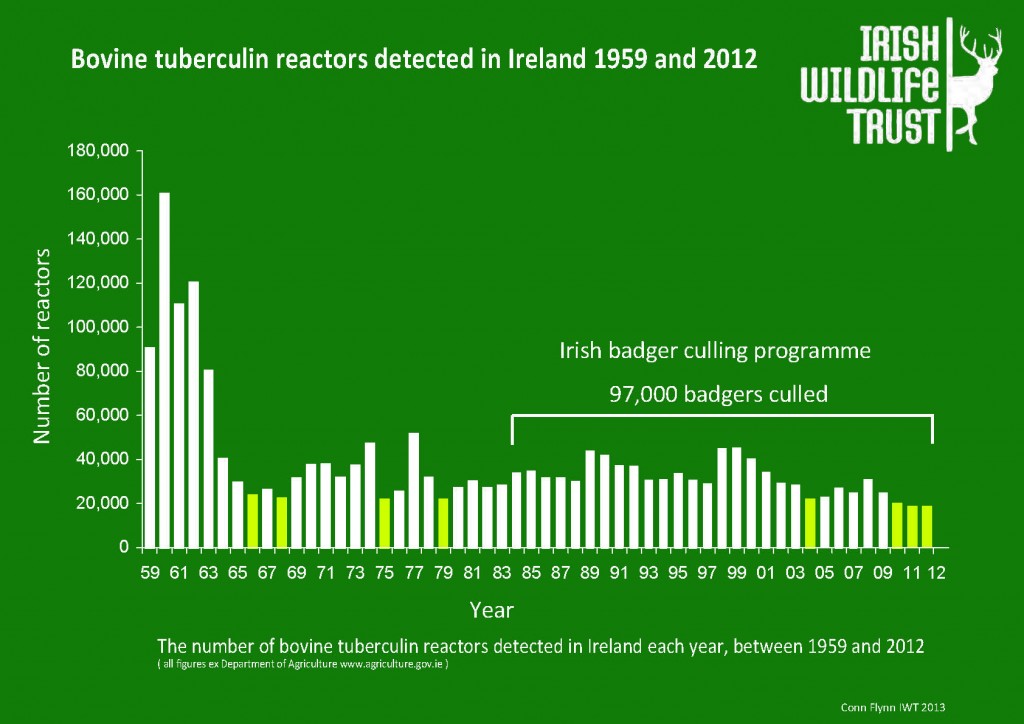 The Irish Wildlife Trust (IWT) is opposed to badger culling and the use of snares. Not only is it barbaric and unethical, recent findings have shown it to be ineffective in the war on bovine TB. Badgers can die over extended periods struggling in these hideous devices while their young starve underground. Nobody has ever counted badgers accurately in this country and while it has always been assumed that they are common animals, this can no longer be taken for granted.

The IWT wants this practice to stop immediately. It is cruel, wasteful and damages Ireland’s reputation for its ‘green island economy’. We recognise that bovine TB is a major problem for Irish farmers but it also must be recognised that culling does not work. Resources should be focused on a national vaccination programme. Faulty science and politically driven motives should not be used as excuses for slaughtering our wildlife.

Please help us stop this cruel and barbaric practice for good by doing any of the following:

Buy our ’Not Guilty’ T-shirt and show your support wherever you go.