‘Origin Green’, the Bord Bia (and so publicly) funded food marketing programme, started life in 2012. In that time annual greenhouse gas emissions from agriculture (which had been on a downward trajectory) have risen by over 11%, from 19,284 to 21,432 kt CO₂ equivalent. According to the EPA, between their 2012-2014 and 2018-2020 reporting periods, loading of nitrogen and phosphorous, key pollutants in freshwater and marine bodies, rose by 26% and 35% respectively. They say that these days a fifth of estuarine and coastal waters have too much nitrogen, triggering “nuisance algal blooms”, particularly in the south and south-east[1]. The level of TB in cattle (something that is accompanied by a badger culling programme that saw nearly 5,000 animals snared and shot in 2020) has been rising since 2016. The Department of Agriculture has noted that “the proportion of [TB] reactors within dairy herds has increased from 48% to 64% (2021 YTD) in recent years. This has coincided with a large expansion of the dairy herd since 2015.”[2] 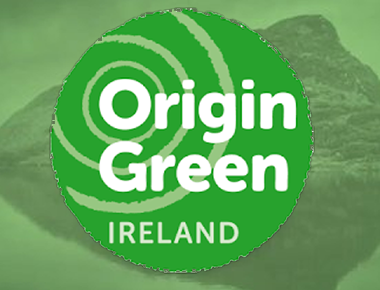 Biodiversity indicators rarely lend themselves to simple indices but regional deterioration in water quality can only put aquatic species, such as the critically endangered freshwater pearl mussel and the merely ‘endangered’ Atlantic salmon, under further pressure. According to BirdWatch Ireland and the RSPB, 70% of farmland birds are now on the ‘amber’ or ‘red’ list of conservation concern. Their 2021 report highlighted how once-common, but now red-listed, farmland birds like quail, grey partridge and corncrake “show no signs of recovery”, while the status of the kestrel and stock dove have deteriorated since the report was last published in 2013[3]. There have been some local improvements in water quality in the last decade but in general all environmental indicators are going in the wrong direction. 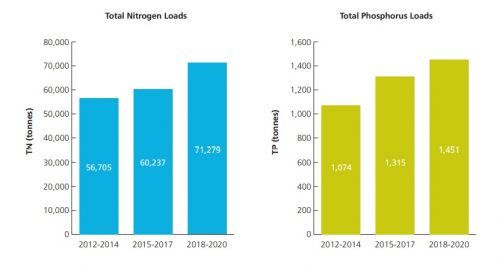 Increases in N and P (from EPA)

All of this may explain why the World Wide Fund for Nature (WWF) appears to be distancing itself from the ‘Origin Green’ eco-label. Last weekend, in an article by Valerie Flynn in the Times Ireland edition, WWF senior vice-president Jason Clay, who has represented the organisation on Bord Bia’s ‘global council’, told the paper that WWF “does not sponsor or endorse” ‘Origin Green’.

That is a marked shift from its stance in 2015 when it heralded ‘Origin Green’ as part of a “groundbreaking national commitment”, “a new model of forward-thinking agriculture” and “an ambitious and unprecedented proposal”. Clay himself was quoted as saying “Ireland’s commitment gives the whole food sustainability movement an important shot in the arm, a vision of what could be, of what should be.”

Many of us grew up admiring WWF and they have many wonderful programmes around the world. But communication does not seem to be a strong point. From the beginning, Irish NGOs were shocked at the gall of the ‘Origin Green’ shtick and felt railroaded by WWF given their global standing but also their absence of personnel in Ireland. There had been no discussions with any Irish NGO prior to their endorsement of ‘Origin Green’. By 2015, Clay had a meeting with some of them on the margins of a two-day conference on sustainable food production hosted in Dublin by an Bord Bia. The encounter was fraught by all accounts (IWT was not there).

In 2016, WWF published ‘comments’ on the ‘Origin Green’ programme and made some fairly strong recommendations for improvement. Among the weaknesses it noted were “lack of acknowledgment of the significant impacts already caused by Irish farming on the environment, especially on water quality and biodiversity”, a low level of ambition (“the requirements made by Bord Bia are weak and lack the ambition that matches the overall vision”), little transparency, insufficient attention on biodiversity and “unclear governance and stakeholder roles”.

WWF recommended greater participation for NGOs, adding that they were “ready and willing to work with Bord Bia, Irish government institutions, researchers, and national and local NGOs, to help strengthen the Origin Green programme so that it addresses the key environmental and social impacts of food production on the ground and avoids the pitfall of being perceived as primarily as ‘green marketing’ for Irish exports.”

There was, subsequently, no contact between either WWF or an Bord Bia with the NGO community in Ireland that I’m aware of. It is unclear what the Bord Bia response, if any, has been to WWF’s recommendations which are now over five years old. 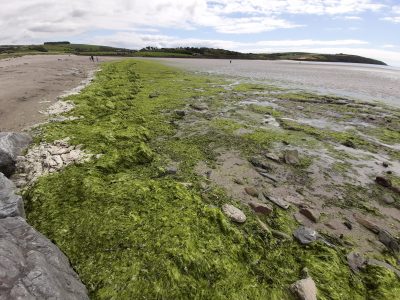 Pollution, resulting in excessive growths of green algae, along the ‘Wild Atlantic Way’ in Co. Cork

While at COP26 in Glasgow last month, the IWT and our colleagues in An Taisce, took the opportunity to raise our concerns directly with WWF staff. Among the high-level delegates that we managed to speak to there was a willingness to listen but also clearly no awareness that WWF had a relationship with the Irish national food marketing agency, even by their Global Food Lead Scientist whom I spoke to (and who otherwise had given an excellent presentation on the challenge of food and environment). Communication issues within their organisation were acknowledged but we never managed to speak to any one with direct knowledge of ‘Origin Green’, or Irish agriculture more broadly.

We did make it clear that WWF support for ‘Origin Green’ needs to stop. Indeed, ‘Origin Green’ itself needs to stop, the grim success of their marketing is all too obvious in the decade that has passed with no meaningful action on nature, water or climate. The marketing did what it was intended to do: dupe people into believing that all was well. But the mounting data leaves no more space for deceit, and farmers, along with the wider public, are left angry and dazed at the mountain that now needs to be climbed.

At a recent webinar held by the Irish Farmers’ Association, Clay was at least honest with the audience that increases in efficiency are no use when faced with absolute limits. He barely mentioned ‘Origin Green’, a hint perhaps that the gloss has worn off. Yet the WWF name remains on official Bord Bia/Origin Green publications.