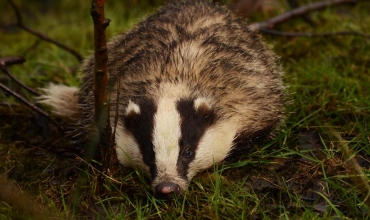 The Irish Wildlife Trust (IWT) welcomes the publication of research which shows that vaccinating badgers is effective in reducing levels of TB in badger [1]. However, yesterdays ‘announcement’ of the results by Minister for Agriculture, Food and the Marine (DAFM), Micheal Creed TD, was unsurprising given that the findings have been widely leaked for a number of years. Indeed vaccinating badgers, ostensibly in the fight to reduce TB levels in cattle, was first mooted in 1991 and this development is significant only for the fact that it is the first publication on the topic in these 25 years.

The new research comes shortly after a paper published in the European Journal of Wildlife Research which showed that badgers tend to avoid farm buildings, and infected badgers avoid them even more [2]. Previous research from Trinity College, Dublin showed that badgers actively avoid pastures with cattle [3]. Indeed in three decades it has never been demonstrated how wild badgers transmit the disease to cattle. Figures from DAFM show that 6,116 badgers were snared and shot in 2015 – a pattern which has continued since culling was introduced in the late 1980s. To date no scientific evidence has been produced which shows that badgers are responsible for the high levels of TB to be found in Ireland and the main source of this disease in cattle is other cattle. This important fact seems to have been forgotten by policy makers in the nearly 30 years that culling has been going on.

IWT Campaigns Officer Pádraic Fogarty says: “this culling programme has been going on for so long that it seems those at the top have forgotten what it was supposed to achieve. It’s incredible how a policy which has failed so miserably in its stated aim can be allowed to continue, never mind be considered a success.”

The IWT acknowledges that TB is a serious disease which needs to be eradicated. However the emphasis on killing badgers has diverted attention from the principle causes of the disease while wasting large sums of tax payers money (over €33 million in 2014 excluding staff). Vaccinating badgers will not solve this problem. Indeed the IWT has serious concerns that the sustained slaughter of badgers is having a significant impact on this charismatic animal and may be leading to local extinctions.

[1] https://www.agriculture.gov.ie/press/pressreleases/2017/february/title,105479,en.html
[2] Use of farm buildings by wild badgers: implications for the transmission of bovine tuberculosis Woodroffe et al.,February 2017.

Photo Credit: In Touch with the Wild Photography