Golden Plovers, sheep, peat and ‘Hurling from the Ditch’

Last week the IWT issued a press release calling for sheep to be removed from hills as an emergency measure to allow for the recovery of damaged peatlands, particularly blanket bogs. It followed the publication of a report from the National Parks and Wildlife Service which details the findings of a survey of the Nephin Owenduff Special Area of Conservation and Special Protection Area (SPA) in Co. Mayo, a vast peatland landscape which includes the Ballycroy National Park (this is notable as the land is in public ownership). The study found that 97% of the vegetation (essentially all of it) had been damaged due to the effects of grazing by sheep while the population of Golden Plover, a typically upland bird for which the SPA is designated, had fallen by 37.5% in 13 years – a dramatic decline given that its numbers were already low.

The fact that there is an problem with free-roaming sheep on hills should come as no surprise; the severe impacts of overgrazing have been documented since at least the 1990s. Reductions in the numbers of sheep took place in the early 2000s but they were not sufficient in many instances for vegetation to recover. Indeed, the IWT has for many years been calling for a new vision for uplands that includes rewilding (restoration of bogs and woodlands) and high nature value farming for those who wish to continue farming. Yet, we’ve made virtually no progress. 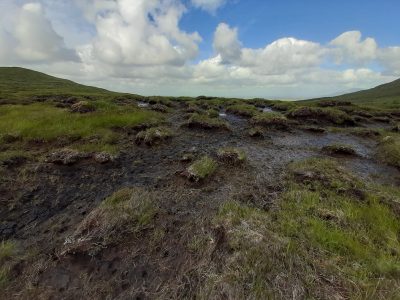 Nevertheless, our press release was greeted with something of a backlash. The head of the Irish Natura and Hill Farmers Association referred to the IWT as “keyboard warriors” and “amateurs” and noting that hill farmers are “the real environmentalists”. Also notable was the intervention of an RTÉ journalist who said in a Twitter post that “it’s so common from some environmentalists to hurl from the ditch but not actually visit ot [sic] talk to stakeholders”, bemoaning that our original post had “plenty of inaccuracies never checked”. I challenged her on this, asking for details of the inaccuracies or what she knew about our travels or engagement with stakeholders but didn’t get a response.

There are two things that are particularly noteworthy in these reactions. Firstly, they do not deal with the issue at hand – indeed these, and other arguments such as the one that says the IWT only wants to blame farmers for the environmental degradation on the hills, are really only designed to deflect and avoid from dealing with the issue. In May of last year, the Dáil declared a climate and biodiversity emergency and yet we have seen no emergency measures initiated. Our call for sheep to be urgently removed from peatlands is totally consistent with this declaration – noting that we have also called for farmers to be compensated and/or incentivised (i.e. paid) to restore habitats or move to more ecologically sensitive ways of keeping livestock. For the record, I had visited the Nephin/Owenduff SAC only the week before while in recent years I have met with, or have attempted to meet with, various farming organisations as well as many individual farmers (and not only in upland areas). I wonder how many of these organisations see outreach to environmental groups as an important part of their work.

Secondly, we see the term ‘real environmentalists’ or sometimes ‘so-called environmentalists’ pop-up time and again. This is a strategy to undermine our work and to de-legitimise what we do. You could say that it is also part of the armoury of detractors to avoid or deflect from dealing with the real issues or facing up to the evidence that is being presented.

Of course, it’s not only the IWT that hears these false accusations and insinuations. An Irish Independent article from Tuesday last carried the headline “This latest ill-informed attack on farming is doing real environmentalists a disservice”. There’s that term again: ‘real environmentalists’, this time in an effort to de-legitimise the work of An Taisce, an organisation that has worked for over 50 years in this area. The journalist here couldn’t resist sliding in an exhausted cliché about An Taisce employees enjoying “a nice latté, courtesy of an almond grove in California or a dairy farm in Brazil”. The article here was about An Taisce’s concerns about ammonia emissions from agriculture and the journalist was well in order to criticise their calculations or core-argument, which he did as well. But he still couldn’t resist the urge to undermine the professionalism of An Taisce staff – even taking a swipe at the salary of environmental lobbyists (which I can personally attest to after working for over 10 years with the IWT as a volunteer, is a laughable tack). [see here for an insight to the salaries of dairy executives or lobbyists with the Irish Farmers’ association].

I have no difficulty with people disagreeing with our stand on hill sheep or anything else for that matter. We need debate now more than ever. But I’m also proud of the work of the IWT, the fact that we have spent over 40 years standing up for nature in Ireland as well as the colleagues who drive the organisation on with their passion and commitment. Many do so for free. I’m also proud to be working alongside An Taisce and the other NGOs who fight a similar battle. I object to the insults and the insinuations that our arguments are not valid or that we have no right to have our voices heard. Most of the people I encounter, including many farmers, have deep concerns about the on-going destruction of nature and the disruption of the climate. I imagine that most people would prefer for us to be working together to get on with finding the solutions. The commentary that I’ve talked about here is getting us nowhere, but then I can’t help feeling that maybe that’s the point.

Pádraic Fogarty is campaign officer with the IWT and editor of ‘Irish Wildlife’ magazine.