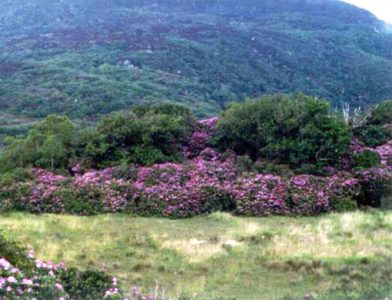 Groundwork has made a formal complaint to the European Commission that the National Parks and Wildlife Service (NPWS) and Department of Culture, Heritage & the Gaeltacht (DCHG) have failed to protect the Oak woods in Killarney National Park from becoming re-infested with Rhododendron ponticum.

Groundwork is a voluntary group which ran work camps removing Rhododendron from 1981 until 2009 in Killarney National Park, with the support of the Irish Wildlife Trust and NPWS.

During that time, approximately 40% of the Oak woods were cleared of Rhododendron and maintained in a cleared condition by Groundwork. Our methods were scientifically proven, successful and are described in the NPWS publication, Irish Wildlife Manual No. 33.

As a result of NPWS mismanagement, the most biologically rich areas of the Killarney Oak woods are now significantly and rapidly deteriorating, and no management plans have been implemented to address the problem. We believe this constitutes a breach of Articles 6(1) & 6(2) of the Habitats Directive.

As early as 2005, Groundwork expressed concern regarding the effectiveness of the NPWS approach to Rhododendron management. Monitoring of the Killarney Oak woods by Groundwork since 2013 has produced abundant photographic evidence that seed production has resumed in all of these woodlands and that they have now reverted to uncleared status which is a deterioration of a qualifying Annex 1 Habitat and therefore represents a breach of Article 6(2) of the Habitats Directive.

Since 2010, NPWS has refused Groundwork’s offers of assistance in Killarney National Park.

Using Access to information on the Environment (AIE) Regulations, Groundwork uncovered documents from both NPWS and Trinity College Dublin’s Botany Department which confirm our findings in relation to the expansion of Rhododendron in woodlands that had been previously free of infestation.

It should be noted that Groundwork cleared and maintained c. 40% of the Killarney National Park Oak woods at a cost of under c.€20,000 a year. The model of Rhododendron clearance we pioneered and perfected over 30 years was both effective and successful. We were a successful volunteer programme which should have been used to complement clearance by Park staff and Contractors.

The methods employed by Killarney National Park to clear Rhododendron have failed due to a lack of a systematic and scientific approach to Rhododendron clearance.

We would hope that a decision from the European Commission would help the NPWS and DCHG implement an effective, scientifically sound Rhododendron management programme.