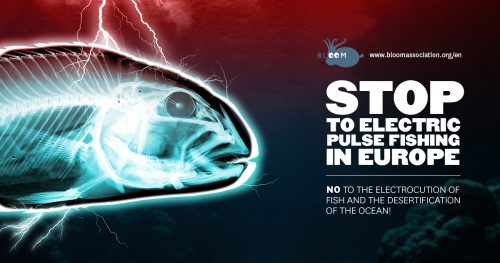 Next week MEPs will be asked to vote on a European Commission proposal to allow so-called ‘electric pulse fishing’ to become a normal fishing practice across the EU. This practice involves dragging an electrified net across the sea floor – stunning all in its path. It is a fishing technique that is just as brutal as it sounds.
The Irish Wildlife Trust (IWT) has joined other environmental groups and organisations representing small-scale fishers from across Europe in opposing this move. Research carried out by the French organisation ‘Bloom’ found that the decision to allow electric pulse fishing to be done on an ‘experimental’ basis went against scientific advice of the day. See http://www.bloomassociation.org/en/electric-fishing-new-revelations-on-a-european-scandal/ .
Proponents defend the electrocution of sea life by saying it is less harmful than the dredging practices currently carried out. This is like promoting cholera because it is better than a dose of the plague.
The history of fishing in Ireland has been one of short-term exploitation in favour of long-term management of marine resources. This has led to the drastic reduction in sea life populations and the disappearance of coastal fishers who traditionally use small boats and low-impact gear. If we want to reverse this trend we need better protections for marine life, not another step on the road to ruin.
The IWT has written to all of  Ireland’s MEPs urging them to reinstate the original blanket ban which came into force in 1998. END
________________________________________________________________________________________
CONTACT:  Padraic Fogarty – IWT’s Campaigns Officer – irishwildlife@iwt.ie for further details
Editors Notes: The Irish Wildlife Trust was founded in 1979 as a charitable conservation body. We provide the public with information about wildlife, run education and training programs like SAC Watch and the Badger Schools Programme, carry out habitat and species surveys like the IWT National Newt Survey, campaign and lobby around biodiversity issues, restore natural habitats, consult with industry, agriculture and Local Authorities to maintain our natural heritage and contribute to national and international forums for the protection of biodiversity. The IWT is a nationwide organisation with a strong membership base, staff and Board of Directors, with branches in Dublin, Longford/Westmeath, Galway, Kerry, Laois/Offaly, Waterford.
Tweet
Share447
Pin
447 Shares
Previous Post Groundwork complains to the European Commission for lack of management at Killarney National Park Next Post IWT welcomes overdue change in strategy in the fight against TB in cattle