The International Union for the Conservation of Nature (IUCN) is a global organisation that has worked for the protection of biodiversity since its founding in 1948. It is probably best known for producing ‘red lists’ of species which are endangered with extinction. Its latest assessment, published last week to coincide with its Congress found that 28% of the 138,000 species it looked at are headed for oblivion. The Congress brings together over 4,000 scientists, government representatives and NGOs from nearly every country and for the first time, the Irish Wildlife Trust was in attendance.

That there was a meeting at all has been a great achievement of the organisers and the host city, Marseille in France, and the first of the big, environmentally-focussed gatherings to be held in the aftermath of Covid-19 (the others being the COP26 climate summit in Glasgow in November, the COP15 for biodiversity in China in October and May, and the United Nation’s Oceans Conference in Portugal some time in 2022). It has been a tremendous challenge to organise and one that has no doubt excluded many from the Global South who have been unable to travel. Many activities were hybrid in nature, including much of the voting for organisational and policy changes. Nevertheless, voting on policy motions which had been thus far undecided was, after some debate, restricted to those in the room. 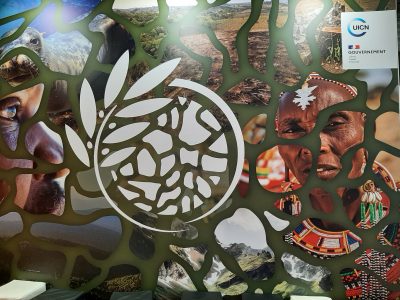 It is clear that there is still a huge appetite for face-to-face meetings like this as much of the energy and inspiration comes from meeting others in the field, socially as well as well during the various working sessions. But other than that, is there any point to them?

Actor Harrison Ford, who gave a short pep talk during the opening event, captured the sense of exasperation felt by many both inside and outside the Congress halls. “Well here we are… again” he sighed, clearly cheesed off that so little seems to change. The sessions I attended all week echoed that.

Many of the attendees are veterans of these meetings, they’ve been doing the rounds for decades, getting greyer and older as their cries for action go ignored. Sometimes this spilled into anger, particularly on panels with indigenous representatives or young people. Over 330 environmental defenders were killed in 2020, mostly in Latin America where resource grabs are destroying ecosystems and trampling human rights. Like the scientists, these people too feel ignored while their friends are murdered and their land stolen. Youth activists too feel that their future is being stolen. But the fact that they are still turning up tells me these people are not giving up any time soon. The delegates who are here in their thousands are evidently set to man the barricades in defence of truth and justice. Despite the many bland speeches, this must surely give the rest of us resolve to keep up the fight.

And apart from the speeches serious work is done. The IUCN represents the scientific consensus when it comes to protecting the natural world and debates that are thrashed out here are likely to find their way into policies in other global fora, for instance the forthcoming COPs. World leaders look to the IUCN for how to respond to the extinction crisis. In answer to the question: what do we need to do? It is the IUCN that has the answer. These originate in ‘motions’ that are debated and voted upon at the Congress.

This year, many motions were approved in advance (see here for the full list) due to the Pandemic, and only the most contentious were left to the event itself. The most talked about of these was a motion to protect half of the Earth for nature; in the end the agreement was to protected at least 30% of land and sea and “to recognise the evolving science, the majority of which supports that protecting, conserving and restoring at least half or more of the planet is likely necessary to reverse biodiversity loss, address climate change and as a foundation for sustainably managing the whole planet.” Other motions which were approved and which are of direct relevance to us in Ireland included one to provide noise-free Marine Protected Areas (MPA), imposing a moratorium on deep sea mining, protecting marine mammals from the depredations of industrial fishing and urging European countries to ‘strictly protect’ and restore their old native forests. These positions now represent the best science in the field and should (if they haven’t already) find their way into EU and Irish policies. Whether it does or not is a different matter.

At a more global level a last minute motion was approved to protect 80% of the Amazon by 2025  has indirect but consequential impacts on us through trade arrangements. In particular, it’s very hard to see how the Mercosur deal with South American counties, including Brazil, could go ahead.

So, what about Ireland? The Irish government has a poor record of engaging with the IUCN and were not present in Marseille. There seemed to be few other countries who were not present and, when I met one delegate from another EU country, he did agree that it was “pretty embarrassing” that we had no government representative. Once again, the National Parks and Wildlife Service presence is noted by the empty chair, the silence on the airwaves and the astoundingly mute response to the biodiversity crisis to-date. This position is no longer tenable.

The French government brought out the big guns for this meeting and emphasised the need to carry the momentum forward to the COPs in Scotland and China. The IWT plans to be there, let’s hope the Irish government shows up too!