Last chance? Or no chance?

Last chance? Or no chance?

The Irish Wildlife Trust is attending the COP26 climate summit in Glasgow. As a first-timer I have been overwhelmed by the enormity of the event. There’s the excitement at witnessing something of such global significance but a disorientation that is only lifting on day 4. World leaders and famous faces not infrequently whizz past, there’s an air of intense activity, but finding our own role in all of this, as a small NGO, has been daunting.

It is physically demanding. Daily Covid testing, queues over an hour long (thank goodness so far the weather has been kind), more queues for dreadful food, nowhere to sit and, perhaps most frustratingly, no single portal to find out what is happening across the dozens of venues and pavilions. I remind myself that these are small inconveniences when contrasted with what is at stake in these meetings. But it seems that optimism and goodwill are in just as short supply as chairs and a decent cup of coffee.

Perhaps it is best looked at as a tale of two events.

On the inside, the well-dressed delegates mill around between media interviews and panel discussions at slickly laid out pavilions. These are predominantly run by national governments, including many of the biggest polluting nations such as Saudi Arabia, Australia, Brazil (despite its leader, Jair Bolsonaro, staying away from Glasgow) and Norway (part of a Nordic pavilion). China is conspicuously absent. There are few NGOs. WWF is here but are indistinguishable from the US government. 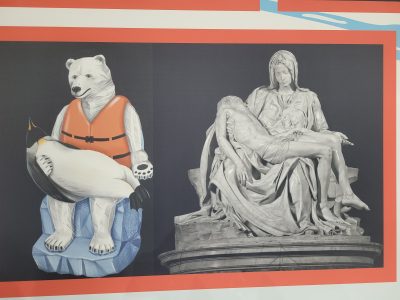 Some of the discussions are excellent, many of the leading figures in their field are here, but they’re all very polite. I’ve seen nothing yet on moving to plant-based diets, abandoning GDP as the defining measure of success or the scale of rewilding needed to restore shattered ecosystems. From the inside, you would scarcely believe that humanity is on the precipice of disaster. Yesterday, I attended an EU sponsored event on carbon in coastal ecosystems and the speaker from Kenya told us that in “our best climate future”, i.e. staying within 1.5 degrees of warming, 70% of coral reefs around the world will die. At 2 degrees, nearly all of them will be dead. This factoid is not new, but it’s astonishing how it simply washed over those in attendance. Where is the outrage? The shock and the horror? Where are those responsible being held to account?

Outside, at least this anger is felt. That is, if you can see the demonstrations behind the walls of high-vis police jackets. A relatively small march by indigenous peoples yesterday, a colourful and benignly noisy affair, was accompanied by dozens and dozens of police. These people are fighting for their right to an existence, the threat to their homes and communities seems inversely proportional to any perceived threat they pose to public order on the streets of Glasgow.

The interaction between the reality on the outside and the sanitised halls of the Scottish Events Centre would seem to be minimal. Those with greater experience of COPs than me tell me Covid-19 has been used as an excuse to keep civil society out of negotiating rooms to an extent never before seen. The air is pessimistic. Even the good announcements, such as that earlier in the week on ending deforestation, are greeted with cynicism. All the promises have already been made, and subsequently broken.

This is not to be overly downbeat. The level of expectation, egged on by ‘now or never’ media headlines, was always too great to meet the reality of the outcome. It’s still early days, as the conference draws to a close next week, it is likely that some breakthrough will occur. The media attention has been phenomenal and outside, the protest marches are growing, and growing. The big one will happen in cities around the world this Saturday. I’ll take the march over the conference events, even though Saturday is the day dedicated to nature. It is on the outside, in the end, where the change will happen.