The COP is entering into its final days. Despite being labelled as a ‘now or never’ moment, the task of meaningfully addressing the climate and biodiversity emergency will remain with us after the delegates head home. No matter what the outcome it is important that momentum is maintained in the days and years ahead to minimise the negative impacts to the greatest degree possible.

The IWT came to Glasgow with the aim of flying the flag for nature, in the expectation that biodiversity would struggle to get a look in. However, I have been pleasantly surprised at just how prominent nature has been in the pavilion area (this is separate from the negotiation area and is the bit my badge allows me to take part in). One delegate I bumped into, who had attended previous COPs (this is my first), assured me this is a major uplift compared even to COP25 in Madrid in 2019.

There is a lot about nature-based solutions (NbS), financing for nature, saving the rain forests, ocean declarations and an entire pavilion dedicated to peatlands (and with impressive contributions so far from Irish-based scientists and ecologists).

The overarching, if unofficial, goal of COP26 is to keep alive the ambition of capping global temperature increase to 1.5 degrees. This is not achievable without nature – that is, the atmospheric reductions in greenhouse gas concentrations cannot be achieved through ending fossil fuel use alone. Many believe these removals can be achieved through technologies, such as carbon capture and storage, however these are not developed at any scale. NbS also have the potential to address other environmental and social issues. The role of nature, not only in taking carbon out of the air, but in helping us adapt to climate change is also recognised in the draft text of the COP agreement which appeared on Tuesday evening (November 9th). This agreement also refers to the role of the ocean, heretofore ignored in the text of climate agreements. This is all immensely positive. 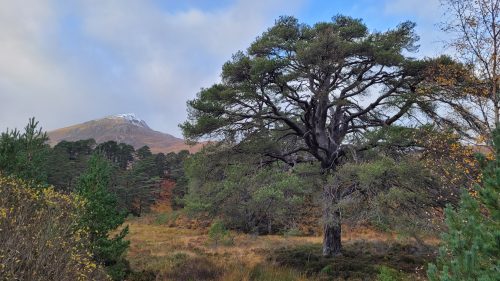 There is, of course, a ‘but’. The level of greenwashing to which we have been subjected over the past decade has left an inevitable pall of scepticism over any and all announcements that appear to be doing good. For example, the declaration during the first week of COP from an alliance of over 100 countries that deforestation would end by 2030 was dismissed by some eNGOs (the promise had, after all, been made before).

Closer to home, the affiliation of WWF to An Bord Bia’s ‘Origin Green’ marketing programme has long been a source of frustration to Irish NGOs. In Glasgow, the IWT and An Taisce had the opportunity to express these concerns to a number of WWF staff which are here, including a meeting with a high level member of their delegation. WWF officially promotes the transition to a plant-based diet, along with a reduction in food waste and a food systems approach to feeding the world within planetary boundaries. Their on-going support for Ireland’s expansionist and intensive model of meat and dairy production is clearly at odds with this. In a brief meeting earlier today with their lead scientist on global food policy, I said as much. He assured me that WWF does not want to be associated with more greenwashing yet finding anyone in that organisation who can be held accountable for their Origin Green endorsement is a seemingly impossible task.

Another form of greenwashing, and just as insidious, is the rush for nature -based investments. One talk I attended earlier in the week on the topic, and which featured a representative from Microsoft, was keen to emphasise how investors are eager, very eager, to invest their money in restoring nature. But this enthusiasm is based upon a valuation of nature for its carbon storage capacity only. Companies like Microsoft are keen to portray themselves as ‘carbon neutral’, not by drastically cutting their emissions, but by offsetting said emissions through the purchase of carbon credits. This means ‘buying carbon’ from forests and wetlands, frequently in poor countries. Whether these investments actually result in carbon storage and sequestration, or how long the ecosystems will cooperate (fires and droughts have a habit of spewing the carbon back into the atmosphere), who knows?

The market in carbon credits is entirely unregulated and is based on ‘voluntary’ commitments. Even so, if a landowner or community were to sell its carbon to a private investor, can these still be counted by countries in their national accounts? The mechanism for carbon trading is one of the things under discussion at Glasgow but it is fraught with difficulty. When regulations do come, will the companies that have already made investments be entitled to compensation for any potential losses?

One thing is sure: even though the attention on nature here at Glasgow is welcome, the realisation that there is a biodiversity crisis, simultaneous but intimately interlinked with the climate crisis, is some way off. Valuing nature just for its carbon is a dangerous and risky path. We need to value nature for its intrinsic properties as well as those which benefit humanity. While finance, wherever is comes from, is welcome, I find it very hard to see a potential profit stream from protecting and restoring ecosystems. If I am right, what is in it for the private sector? I see no substation for public money being used for this task, based on taxing the wealth of individuals and corporations. But this is not something I have heard under discussion here at the COP.