Look to the sea

Look to the sea

The sea has given us everything. The earliest people lived by, and off, the sea, as have generations that followed. The sea brought us our history, from the Viking and Norman invasions to the Martello towers that were built as look-outs for a Napoleonic invasion. The sea took our hopeful and destitute during times of famine and today we look to the sea for a redemption of sorts, as the source of greenhouse gas-free energy that will help ward off climate collapse. In a way that has only relatively recently been appreciated by science, we know that every other breath we take comes from oxygen generated by marine plants while the sea has absorbed much of the heat and the carbon dioxide generated by human industrial activity. During the pandemic more of us have turned to the sea for calm and solace. But let’s face it, it has been all take.

The sea is in a dire state and is, quite literally, rising against us. It’s time to start giving something back and, like much of nature, what it craves most is time and space.

On July 30th the period of public consultation on the creation of Marine Protected Areas (MPAs) for Ireland will close. The Irish Wildlife Trust has been campaigning for the creation of MPAs for over a decade. When it signed up to the EU’s Marine Strategy Framework Directive in 2008 the government agreed to establish a ‘coherent network of MPAs’ by 2020. At a conference held by the Sustainable Water Network (SWAN – an alliance of environmental groups) in 2017, then-minister for the Marine, Simon Coveney, promised us we’d have legislation for this purpose by the end of that year.

Needless to say, Coveney didn’t make good on his word, while the new government’s programme commits to achieving 30% coverage by 2030. We have to-date designated a shade over 2% of our waters in Special Areas of Conservation (for habitats and species which are not birds) and Special Protection Areas (for birds) but these MPAs are not managed so they are not useful in protecting biodiversity.

My colleague, Regina Classen, and I have spent the last months trying to raise the profile of this consultation period through social media videos and webinars. We held a series of virtual townhall meetings in coastal counties from Donegal to Dublin. We heard from local politicians, scientists, community groups and interested citizens and I was impressed with the breath and depth of interest in the sea. In June we heard from National Geographic’s Enric Sala, who gave us a global perspective on the need to protect the ocean while last week we heard from activists in Ireland and Britain on themes ranging from ‘blue carbon’ (how coastal ecosystems store carbon) to the experiences in Lyme Bay in England, where local fishers have been working with the Blue Marine Foundation to protect biodiversity and enhance their livelihoods.

Our friends in the Irish branch of Extinction Rebellion held a colourful protest in Dublin calling for MPAs, which we attended, while they have also been raising ‘poo flags’ on beaches where human wastewater is being pumped to the sea with little or no treatment. 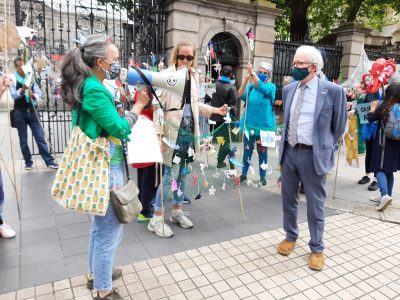 There are a number of things I took away from the many conversations I have had since April. Firstly, there is a strong – and growing – interest among Irish people in the sea. I’d even go so far as to say there is love for the sea. Perhaps this has been underappreciated in the past but as people realise the pressures it is under the love is turning to concern and even anger. In our Donegal and Kerry events we heard from locals how aquaculture developments are threatening their local coasts. They might have assumed that because many of these areas fall within existing MPAs that they would be somehow protected. There has been shock to discover that this is not the case and that the state tends to be on the side of the developers in privatising the public spaces that they love.

Which brings me to my second point. There’s a lot we could be doing right away in protecting the sea. Even though only about 2.1% of our seas are within existing MPAs, these are home to vitally important species and habitats. We would like to see EU funding through the LIFE programme (the same fund that developed the highly-successful Burren farming for nature project and which brought the Iberian Lynx back from the brink of extinction) for our marine MPAs. This would start the vitally important work of engaging with local interests and setting up structures for the management and monitoring of these areas. A dedicated LIFE project for the marine would give us a head start when new legislation for MPAs is eventually passed.

I was impressed with the contribution of marine scientists to our events and there is already an impressive body of knowledge ranging from fisheries and social science, to seabed mapping and carbon sequestration. But there is much we don’t know. Our internationally important seabird populations are poorly monitored while marine fish and invertebrates (with the exception of sharks and their cousins) have not even been assessed for their conservation status. We have not mapped our carbon rich habitats from seagrass beds to kelp forests while the carbon being released from muddy sediments on prawn trawling grounds is not quantified. Greater investment in science will be essential in protecting the sea and in planning developments in the marine environment, particularly when it comes to off-shore energy installations.

Protection must mean protection. While Ireland has lagged behind the designation of MPAs there are precious few examples in European waters where MPAs are actually delivering. The science is clear that the most effective way of protecting an MPA is to stop all kind of extractive activities. Basically, just leaving the sea alone will result in a restoration of marine life in most cases. This is complicated where there are many small-scale fishers who may not have alternative fishing grounds, or it may push fishing effort into areas outside these ‘no take zones’, leading to conflict and ecological degradation in these areas.

We want these fishers to feel like they are included, not excluded, from the process. But at a minimum we have to demand that MPAs exclude industrial fishing. This means no big boats in MPAs and no dredging or trawling. An MPA that allows industrial fishing is simply a waste of everybody’s time and will deliver nothing for anyone.

Finally, there is the urgency. To-date the government has shown no sense of urgency in dealing with any of the pressures affecting our seas, not only MPAs but in ending overfishing or reducing pollution. The bigger picture is that we have a very limited time window to address the climate and biodiversity crisis – less than a decade say scientists. If we don’t act in that time we risk triggering irreversible tipping points and/or increasing warming effects that will be truly catastrophic for life on earth. Yes, we have to do things carefully, but we also have to do things. We have to start showing our love for the sea and to give something back.

And until the end of July you have the chance to give something. We need you to take 10 minutes to send an email to marine.env@housing.gov.ie telling them why we need MPAs. It doesn’t need to be long or technical and personalised messages will carry more weight. But if you want inspiration please visit our website where we have a template email and some suggested points you might want to make. But above all, please do it.