I first left the country in 1986, at the age of 12. It was a much-anticipated family sun holiday to Mallorca. Until then every holiday had been to the caravan in Wexford. This was perfectly normal at the time, leaving the country was expensive. But my generation was quick to catch up. I longed to see the world and during these wanderless early years, I stuck pins on a map of the world on my bedroom wall of all the places I wanted to visit. There were a lot of pins.

The 1990s heralded an unprecedented explosion of air travel. No previous generation in the history of humanity has had such access to the world, something made possible only with cheap air travel. J1 visas to the US, gap years in Australia and round-the-world back-packing trips were all standard fare by end of the 20th century. I managed to take quite a few pins off the map as the years ticked by. And, until recently, I never gave a thought to the carbon dioxide this was pumping into the air.

While aviation contributes a relatively small portion of global greenhouse gases (1.9% according to www.theworldindata.org) for those who fly, it occupies a whopping portion of their personal carbon footprint. While the precise emissions depend upon the type of plane, where you sit on the plane (first class vs economy) and the distance you travel, the average is somewhere around 80g of CO2 per km. A return Dublin to New York flight in an economy seat is estimated to release around 1.6 tonnes of CO2, that works out at about 10% of the total annual emissions for an average Irish person. Maybe that doesn’t seem so much but Ireland’s per capita emissions were the third highest in the EU in 2017. To boot, emissions from international flights are not counted under the Paris Agreement.

Meanwhile it is estimated that 80% of the world’s population has never set foot on an airplane! Essentially, flying, particularly the unnecessary sort (think stag weekends in Prague) is eating into the ever-shrinking global carbon budget if we are to stay within 1.5 degrees of warming. And it is the wealthy that are doing all of the eating. The more we fly, the less available emissions there are for others to adapt to a rapidly warming climate. 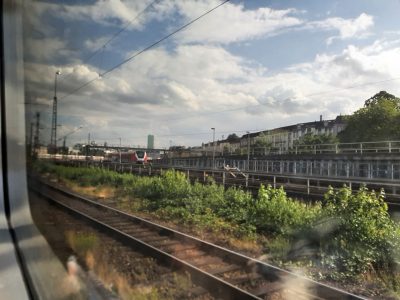 I have been part of this problem and in the years before the pandemic I had paid to ‘offset’ my emissions from flying. But I did this with an uneasy feeling that I was merely buying indulgences and, as time has passed, the offsetting of emissions has lost credibility (even petrol stations in Ireland these days are claiming to be ‘carbon neutral’).

Like most people, I have not left Ireland since the start of the pandemic, but with in-laws in Scandinavia, it wasn’t going to be long before an overdue trip to relatives came on the cards. A return flight from Dublin to Stockholm in the middle of August will cost about €350 and flying time is about two and a half hours. Airlines don’t pay tax on their fuel so the tickets are artificially cheap. Booking is easy, most airlines now have apps so that you can book, pay and check in from your phone.

Taking a train meanwhile, is an altogether different proposition. There are no longer ferries linking England with Scandinavia, which would be the most direct route, so you must go through mainland Europe. There is nowhere to buy a single sail-rail ticket between the two cities and the best estimate is three days of travel. With no overnight trains the cost must also factor in hotel stays along the way. So who in their right mind would take the overland route instead of flying?

I have travelled across Europe by train before, so I know that it’s possible. You can get to Japan by train and boat from Ireland quite easily if you have the inclination and weeks and weeks to spare. India and South-East Asia are more challenging but possible. Africa is doable for the really intrepid but America is virtually off the cards (unless you’re Greta Thunberg or sail on the Queen Mary II).

I feel confident enough to navigate the various cities and train stations and am determined enough to overcome the logistical challenges. So, I left Dublin on Tuesday evening bound for Holyhead. The next morning, I set off for London (via Chester and Crewe), taking the Eurostar to Paris and then Brussels (normally there would be a direct connection to Brussels but the schedule seems to be curtailed by Covid). An early start the next morning took me to Cologne, then onwards to Hamburg (a cancelled train due to the recent storms in Germany didn’t inconvenience too much due to the frequency of intercity trains in that part of the world). An S-bahn across Hamburg took me to Altona station where I picked up the mainline to Copenhagen, getting off near Odense for a bus connection due to line repairs, arriving in that city late on Thursday. An early start again on Friday for the short hop between Copenhagen and Malmö was 20 minutes delayed, necessitating a breathless dash for the onward connection to Stockholm. I arrived at my destination, the picturesque island of Dalarö in the Stockholm archipelago, on Friday afternoon. 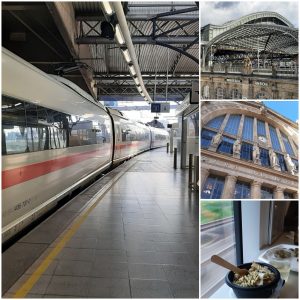 So, nearly bang on, a three-day trip: one boat, 13 trains, one bus and five countries. The overland distance is nearly 3,000km, nearly twice that of flying. www.carbonfootprint.com calculates that a one-way flight would have emitted 0.23 metric tonnes of CO2 while taking the train emitted 0.01 tonne – a massive difference. I’m hoping these figures are correct as it proves that surface travel will significantly lower your carbon footprint (and that I’m not completely wasting my time).

To overcome the ticketing problem, I bought an interrail pass which allows me seven days travel in one month and cost €340. This does not cover the total price as many trains, particularly the fast ones, command a supplement. So, adding the cost of a hotel room in Holyhead, Brussels and Copenhagen, the whole trip (including getting home) is over twice the price of an airfare. The interrail ‘rail planner’ app allows you to plan connections fairly easily as well as making reservations where these are required (and they mostly are).

Despite some minor hiccups everything ran on time and with half-decent wi-fi and power points it was possible to work throughout (take note IWT bosses!). Trains are clean and comfortable and you get to watch the landscapes roll by (although admittedly across northern Europe these do not change very much). Food, where is it served, is mostly terrible. The number of connections, and navigating unfamiliar stations along with the sometimes tight switchover times, is not for the faint-hearted and the whole trip would be a nightmare with small children.

Still, I arrived on time and unfrazzeled. The European train network is world class, rivalled only by Japan’s. But it is not set up for the kind of cross-continental journey I am doing. There are simply too many trains and booking is too hard. But I will be doing it again! I can hope that a resumed ferry from the UK to Norway or Denmark would make things faster and simpler. Or perhaps an overnight train from Brussels to Copenhagen would take a chunk off the journey time. There’s lots that could be done to encourage more of this type of travel. Until then it will be another dozen trains and a boat to get me home!