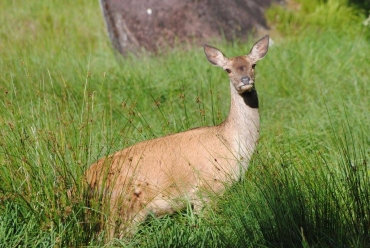 The Irish Wildlife Trust (IWT) and Wild Deer Association of Ireland (WDAI) have welcomed discussions with the National Parks and Wildlife Service (NPWS) which the groups held in Dublin on Friday last, April 15th. The two conservation groups had previously expressed concerns over the culling of Ireland’s unique red deer herd in the Killarney National Park. NPWS officials confirmed that a forthcoming management plan for Killarney National Park will be developed this year in collaboration with interested parties. They also highlighted that census data on the red deer herd had been gathered in 2015 and a further census would take place in 2016. These figures had heretofore been unavailable to conservation groups.

Pádraic Fogarty, Campaign Officer with the IWT says. “we very much look forward to participating in the drafting of the management plan for Killarney National Park, something which will hopefully address the many problems it faces in a coherent manner.”

Damien Hannigan of WDAI says “we are heartened to learn that a census of red deer has been underway, something we have been calling for some time. Although we have yet to see the actual figures, a robust census is essential for any management programme of the red deer herd.”

The Killarney red deer are a unique part of Ireland’s heritage, having been brought to this country in Neolithic times, some 5,000 years ago. The IWT and WDAI are not opposed to culling deer as a last resort for managing the herd but feel this must be based on sound scientific evidence, a management plan, and having exhausted other reasonable interventions.