Press Release: destruction to wildlife and landscape across Ireland as 19 wildfires recorded in 10 days 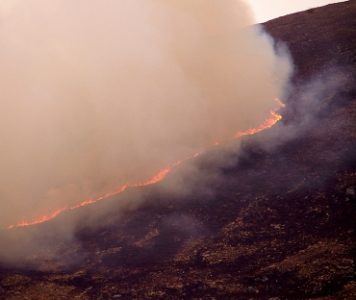 The Irish Wildlife Trust (IWT) would like to thank the many people who responded to our call to log wildfires with us. In the 10 days from April 16th to 26th we received reports of 19 separate wildfires from across Ireland – from Killarney National Park in Kerry, the Slieve Aughty mountains and Connemara in Galway, The Blackstairs mountains in Carlow and the Beara peninsula in Cork. 11 of these were inside areas protected for nature conservation.

All fires between March and August are illegal under the Wildlife Act. Fires in protected areas, at any time of the year, need approval from the National Parks and Wildlife Service. Under Department of Agriculture rules, land that has been burned is not eligible for the single farm payment and the IWT calls for this to be enforced.

Repeated fires across our uplands, something that has become an annual feature, is causing tremendous damage to wildlife, landscape, water and air.

IWT Campaign Officer, Pádraic Fogarty says “in the short term we need the law to be enforced to send the message that this destruction is not tolerable. In the long term however we need policies that promote sustainable farming in upland areas. Under the current system both people and wildlife are under threat in these areas.”

It was announced today that the European Commission is taking legal action against the British government in relation to their land use policies in upland areas, something which the Irish government needs to consider.

The IWT would like to thank the emergency services who have been active in addressing the problem of wildfires across Ireland in recent weeks. We also restate our call for people to contact us at irishwildlife@iwt.ie when they see a fire.