This week saw a significant milestone in Ireland’s tortuous journey from climate laggard to climate leader with the publication of the Climate Action and Low Carbon Development (Amendment) Bill. It is a significant achievement for the Green Party in particular, which delivered on its promise to deliver the bill within the first 100 days of government. Non-governmental group Stop Climate Chaos was measured in its response, noting that it was a “substantial improvement” on the 2015 law but with “significant weaknesses” remaining. Especially worrying is the commitment in the bill merely to ‘pursue’ carbon neutrality by 2050, rather than actually ‘achieve’ this goal. It is much the same as the way I get out of bed in the morning aiming to pursue a healthy a virtuous life knowing that, when this doesn’t happen, I don’t need to beat myself up. It’s not really a commitment at all in fact. Let’s hope this can be fixed as it makes its way through the chambers of the Oireachtas.

If it does, ‘carbon neutrality’ within the next 30 years is an ambitious goal that is set to transform our lives and our country. The phrase is sometimes used alongside ‘net zero’ emissions which means that we may still be burning fossil fuels in 2050 but that these emissions will be offset, or even negated, by removing greenhouse gases from the atmosphere. Business-as-usual advocates cross their fingers that some technological breakthrough that can capture carbon and store it away permanently will allow pollution and habitat destruction to continue unabated; there is no evidence that such a technological breakthrough is on the horizon. 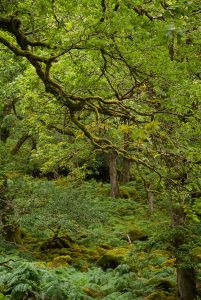 Undisturbed native woodland can be best for storing carbon

On the other hand, a means for carbon capture and storage does exist. Indeed, it has been in research and development for over 3.5 billion years: nature. Chlorophyll in plants has been using solar energy to take carbon dioxide from the air and using it to grow leaves, roots, branches and trunks for eons. Some of this carbon is exhaled by the plants when the sun goes down, but much of it goes into growing the plant itself. A living tree locks this carbon into its ever-growing trunk – the humble birch will do this for decades, an oak will do it for hundreds of years, a yew tree may well keep doing it for over a millennia.

Carbon is also passed into the soil, where it enters a symbiotic relationship with fungal mycelium threads, adding to, and building up, soil more or less forever. When plants die, rotting can release carbon back to the atmosphere. However, the big, slow-growing trees do this incredibly slowly. In certain conditions, e.g. where low humidity prevails, the pace of rotting is so slow its negligible. Very large and slow growing trees such as yew or the giant cedars of the Far East, may not rot at all – effectively locking in carbon permanently. In healthy peatlands, vegetation can be prevented from rotting due to the acidity of the peat, locking in even more carbon – again, more or less permanently.

In the ocean, water naturally dissolves around 30% of the carbon from the air, which is balanced by the growth of marine organisms, from tiny plankton to shell-bearing molluscs and crustaceans, coral reefs and great whales. This absorption has increased with greater concentrations of CO2 from fossil fuel burning and it is estimated that 1,300 gigatonnes of extra CO2 has been removed over the last 200 years, or 38% of human-driven emissions in that time. The ocean has also absorbed about 90% of the trapped heat, meaning that without the cushioning effect of the seas – our goose would already be cooked by now. This cushioning cannot last as the seas warm and acidify, disrupting its carbon cycle and reducing its ability to absorb even its ‘normal’ amount. Healthy coastal habitats can also store carbon, e.g. from sea grass meadows to kelp forests – habitats which are also rich in biodiversity. 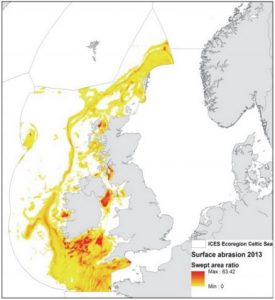 But these days nature in Ireland is not absorbing carbon. Our forests are effectively non-existent and commercial plantations are no substitute, likely releasing more carbon then they absorb. Our bogs are significant greenhouse gas sources as they are drained and stripped of their vegetation from fires, grazing animals or turf-extraction. Our agricultural land is also a source of climate-altering gases, not only from the application of artificial nitrogen and methane from cattle and sheep, but also erosion and depletion of soil biodiversity (and so soil carbon). At sea, the removal of  marine life, from overfishing to historic reductions in populations of the great whales, has diminished its carbon storage capacity. Bottom-trawling, which relentlessly agitates sediments which had been building up on the sea bed, is also releasing greenhouse gases, and nearly everywhere around our coast is subjected to this most damaging form of fishing. 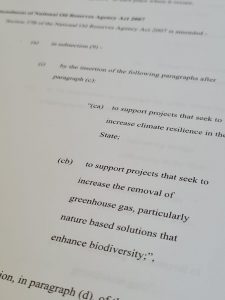 The good news is that our new Climate Bill explicitly contains a clause to allow for climate action funding to be granted for projects that “support projects that seek to increase the removal of greenhouse gas, particularly nature-based solutions that enhance biodiversity”. This is a great win for Jennifer Whitmore, the Social Democrats TD for Wicklow, who fought to have this clause inserted. A SocDem press statement to commemorate World Environment Day earlier this year stated that this means “using nature itself to solve our environmental problems in a sustainable and cost-effective way… When it comes to carbon capture, we are all aware of the benefits of planting trees. But, there’s many other nature-based actions we could take that would help also. For example, rewetting our bogs or building up our ‘blue carbon’ by protecting and restoring our marine environments such as seagrass beds. These solutions all need to play a large part in our climate adaptation and mitigation strategies.”

Indeed, some estimates reckon that using nature-based solutions can help to achieve as much a third of our climate goal under the Paris Agreement. Restoring our forests and peatlands, promoting regenerative forms of agriculture and protecting the seas are key actions in rebuilding ecosystems. We now know that everything from saving the curlew to rebuilding commercially valuable fish populations are also forms of climate action. It’s very exciting to see this recognised in the Climate Bill.