Last week I spent some time walking in Norway. Outdoor activity in the country is a national obsession and starts at an early age with their utebarnehage (outdoor kindergardens). Here, children spend much of their week in the forest regardless of the weather. Babies in cots are brought inside for their naps only if the temperature dips below -10˚C. Den Norske Turistforening (DNT) is an organisation founded in 1868 and works for a ‘genuine, active, inclusive, and nature-friendly friluftsliv (literally ‘fresh air life’). It maintains around 20,000km of off-road, marked trails (for both walking and skiing) across the whole country and has over 300,000 members out of a population of c.4 million. The network includes 1,200 hytter; or cabins, which range from full-service accommodation with meals, to very basic shelters with only a woodstove fire.

Norwegians enjoy the allemannsretten, or right-to-roam, so that walking and camping are permitted anywhere on uncultivated (more or less unenclosed) land. This right comes with respect for landowners, others, plants and animals and is something that is continuously emphasised. I walked for about 100km in the Sør Trøndelag region (between Trondheim and the border with Sweden) camping by lakes and forests near the cabins along the way. I crossed one public road in that time, while much of the hiking was through native forests, bog and mountainous terrain above the treeline.

According to Environment Norway about 11.5% of the country is ‘wilderness-like’, a figure that has seen a “dramatic reduction” during the 20th Century. At the turn of the 19th Century, it is estimated that half of Norway was at least 5km from a road or major infrastructure. Still, along my route I encountered little evidence of human intrusion: no commercial forestry, a handful of farms and no ‘one off’ houses, though there are private hytter tucked into the forest and some major hydroelectrical installations which can be seen in the landscape as large reservoirs and power cables. 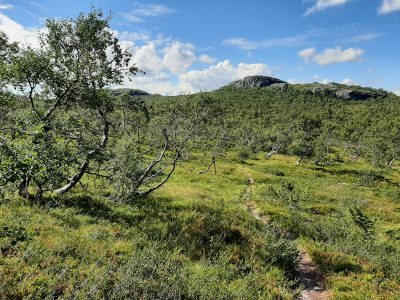 Farm animals were few. I did have to shoo off a small flock of sheep one night who were showing too much interest in my tent, while reindeer are a common sight across the open uplands. Although these animals seem to have minimal impact on the vegetation, they affect the ecology in indirect ways. Large predators are not permitted and despite the vast expanses of suitable habitat the area I walked through has no resident bears, wolves, lynx or wolverine. Wolves are critically endangered in Norway and according to WWF there are only between 109-114, roughly a quarter of which are shot annually. The Norwegian government has established a ‘wolf zone’ in the south-east, where wolves are allowed to exist, covering 5% of the country’s area. If a wolf strays outside this zone, permission to shoot it is quickly granted according to WWF. Despite the licenced shooting, illegal killing is also an issue. WWF says that half the wolf mortality in Scandinavia is from illegal activity. Even with all the shooting, the issue of wolves is toxically polarising in Norway and this shows no sign of abating. The situation is little better for the other predators, which are all threatened with extinction and which are confined to isolated corners of the country.

Nevertheless, the uplands were alive with birdlife on my trek (at least that was my impression when compared to walking in uplands in Ireland!) with golden eagle, golden plover, redshank, sandpipers, pipets and other species I didn’t recognise. Without large flocks of free-roaming sheep (or many deer for that matter) the vegetation is well developed. In fact, the upland forests are among the most beautiful I know, with twisty birches interspersed with juniper bushes, rowan, heather and other flora. Lower down in the valleys there are stands of Norwegian Spruce and my route took me through some old-growth forest (ancient woodland) in the Skarvan and Roltdalen National Park.

Interestingly, the extent of this old forest in Norway is little better than in Ireland, at about 2% (to qualify for ‘old-growth’ or ‘ancient’ it should have been continuously wooded since at least 1600). Like nearly everywhere in Europe, the original forests were felled for timber. Today, Norway is 38% forested, a phenomenal turn-around in the space of a century. According to figures from the UN 83% of this ‘new’ forest has naturally regenerated while the remainder has been planted. The story of Norway’s re-forestation is oft-told in rewilding circles in Ireland and Britain as a way of demonstrating that our own treeless hills need not stay that way. It is also a repost to those who insist that trees don’t grow in these places because it is too wet/windy/rocky/exposed etc.

Much of Norway’s forest is commercially exploited and on my travels I have seen areas of clear-felling and plots of monoculture (though the much-maligned Sitka Spruce is not permitted). Areas of forest that are just for nature are confined to those areas where it is not commercially profitable to exploit them. Forests are home to 60% of the recorded species in Norway and extensive ‘red lists’ are made of everything including fungi and lichens. This is much more expansive than the red lists we have in Ireland. 30% of Norway’s habitat types are threatened while 2,355 species are assessed as threatened with extinction. This is a reflection of human intrusion into previously ‘wilderness-like’ areas, the relatively young age of its forests (very old forests are more structurally and species diverse) as well as climate change. 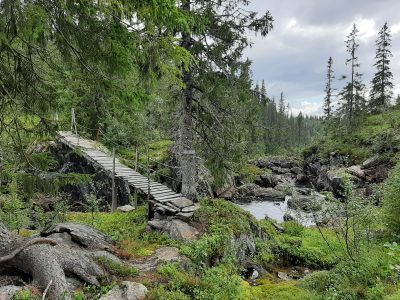 Norway also has plenty of bog and I saw a lot of this on my walk. It’s also possible to see where trees are growing, and not growing, on bogs. Scots pine, in particular, is a common sight on bogs, presumably where the peat is shallower. It creates a very mixed landscape, with patches of woodland, open wetlands and hillsides and scattered trees. Flowers like harebell and yellow-rattle, synonymous in Ireland with pastures grazed by animals, grow in open woodland rides and the edges of bogs. It makes me think that we (ecologists) need to be more open-minded about where we think certain species will thrive. 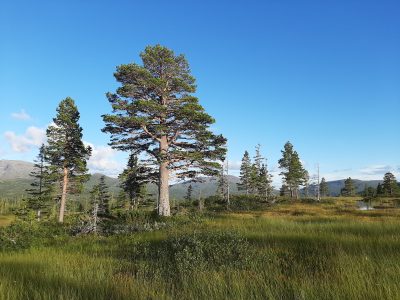 Norway shows us some of the immense opportunities, as well as some of the challenges, that Ireland faces if we are to address the climate and biodiversity crisis. Re-establishing woodland cover to about 30-40% by 2120 is possible but only if we prioritise natural regeneration, i.e. if we can give nature some time and space. On bogs, we should be restoring hydrology but otherwise we should not be too hung up on the appearance of native trees. We could also aspire to the wonderful connection Norwegians enjoy with nature, not only the ease of access to the countryside but also the quality of the nature in these places. But Norway still struggles with predators while the tension between commercial exploitation and allowing natural processes to dominate is very much a live issue. In that regard, Norway is no further on than any European country, but for all that, I’m already planning my next long distance hike here!