Petition: Reverse the decision to abolish the Department of the Environment 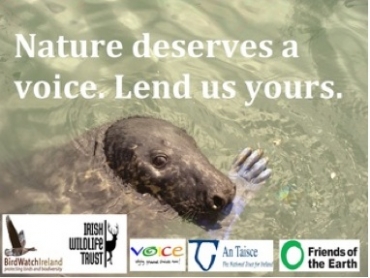 The Irish Wildlife Trust, along with Friends of the Earth, VOICE, Birdwatch Ireland and An Taisce, is launching a petition calling on the Taoiseach to reverse his decision to abolish the Department of the Environment. Join us in supporting Irish wildlife by signing this important petition now.

To: An Taoiseach, Enda Kenny TD

Why is this important?

Taoiseach Enda Kenny announced the restructuring of ministerial departments to better reflect the new government’s priorities and then promptly abolished the Department of the Environment. This does not bode well for this government’s future plans for Ireland’s environment. In fact it indicates a blatant disregard for a healthy environment and its importance to a healthy economy and society.

Not only have the words ‘environment’ ‘heritage’ and ‘community’ been culled from the titles of all departments, but the programme for government doesn’t even include a section on the environment and nowhere does it mention nature or water protection. This flies in the face of the UN’s Sustainable Development Goals, which the Taoiseach signed up to just six months ago and which clearly state that environment, society and economy are equal and interdependent.

Environmental functions traditionally housed under a single department have also been split, spreading waste, water and wildlife across three Departments. This fragmentation further weakens the impact of environmental considerations on government decision-making and hampers a cohesive approach to environmental protection.

By reintegrating environmental functions under one minister the Government would be recognizing both the innate value of the Irish environment and our moral and legal obligations to protect, restore and enhance our environment for current and future generations.

Otherwise Ireland will be the only EU Member State with no Minister of the Environment, a matter of considerable international embarrassment.