PRESS RELEASE: Irish Wildlife Trust calls for moratorium on pair-trawling to save the marine environment 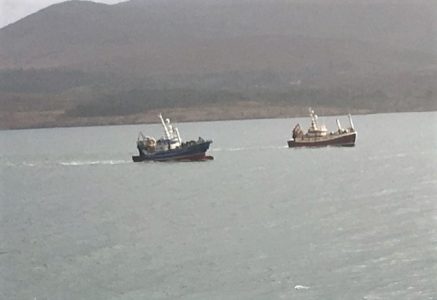 The Irish Wildlife Trust (IWT) has written to Minister for Agriculture, Food and the Marine Michael Creed asking him to impose a moratorium on pair-trawling to protect the marine environment, particularly in the south-west. Pair-trawling is the practice of two boats hauling one fine-meshed net. It is typically carried out in shallow bays and estuaries where sprat (a small shoaling fish) gather in great numbers at this time of year. Unregulated pair-trawling sieves the water of all life, not only resulting in the collapse of the sprat population, but also impacting on the entire marine food web including whales, dolphins and larger fish.
Earlier this year Minister Creed held a public consultation on trawling within the 6 nautical miles zone. The IWT understands that his department received an enormous 1,000 responses – an unprecedented figure for a consultation of this nature. While it is no doubt that it will take time to consider these submissions, the IWT feels that urgent measures are required to prevent the total collapse of marine ecosystems.
IWT Campaign Officer Pádraic Fogarty says, “it’s absolutely crazy that this level of unregulated fishing is allowed to continue as it has. It should have been banned years ago but now we really are on the threshold of collapsing the marine food chain in these areas. The Minister did the consultation and there was enormous interest – he now needs to get on with the task before it’s too late”.
END
CONTACT:  Padraic Fogarty – IWT Campaigns Officer – irishwildlife@iwt.ie for further details
Tweet
Share417
Pin
417 Shares
Previous Post Environmental Groups enraged as Minister Madigan uses conservation plan to push for damaging forestry in protected sites. Next Post Launch of new Biodiversity Awards