Press Release: Irish Wildlife Trust (IWT) calls for sheep to be taken off the hills to allow restoration of upland and peatland ecosystems 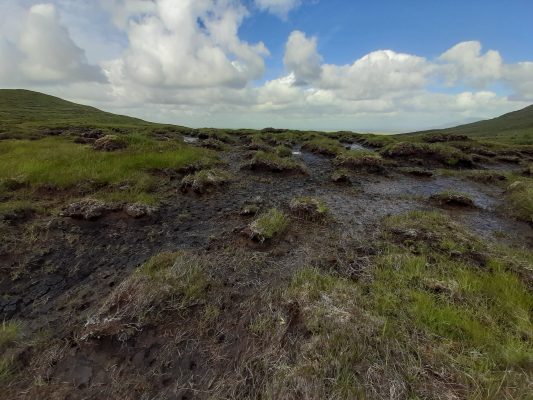 IWT is calling on the Minister for Agriculture, Food and the Marine Dara Calleary, Minister for Land Use and Biodiversity Pippa Hackett and Minister at the Department of Housing Malcolm Noonan to take emergency steps to restore peatland ecosystems and to commence the destocking of hills, particularly those in areas protected under the Natura 2000 network.
While the negative effects to peatlands from animal grazing, and especially sheep, has been well documented, this call for urgent destocking comes after the publication of a new study from the National Parks and Wildlife Service which examined the Nephin/Owenduff Complex Special Protection Area in County Mayo [1]. The area is also part of the Ballycroy National Park and a Special Conservation Area. The study, which was carried out in 2019 and involved field surveys throughout the SPA, found that a massive 97% of the vegetation had been ‘damaged’ (80% ‘moderately damaged’ and a further 17% ‘severely damaged’). It found that the population of Golden Plover, a bird species for which the SPA has been designated, has fallen 37.5% since 2006. This marks a stark deterioration in the conservation status of the SPA, something which is at odds with its designation under the Birds Directive and the Habitats Directive. This damning evidence highlights the failure of conservation efforts and warrants urgent and decisive measures in line with the ‘biodiversity and climate emergency’ which was declared by the Dáil in 2019.
IWT campaign officer Pádraic Fogarty says, “we’ve had decades of piecemeal measures or, in many cases total inaction, which have led to the serious deterioration of upland and peatland ecosystems across Ireland. Urgent restoration measures are now needed to reverse this decline and these must include a complete destocking of farm animals from affected areas. Farmers and landowners which will be impacted must be compensated under a ‘just transition’ which could include payments for ecosystem restoration. However, there is no question that urgent measures are now needed and we urge ministers Calleary, Hackett and Noonan to act swiftly”.
Earlier this month the European Commission referred Ireland to the European Court of Justice for a failure to fully designate SACs and SPAs (the Natura 2000 network) and for a failure to devise conservation measures for any of the 423 SACs [2].
Last weekend (July 18/91 2020) the IWT spent time in the Ballycroy National Park, including the so-called ‘Wild Nephin wilderness’ which was launched by then-taoiseach Enda Kenny in 2013. We found that commitments to convert the plantation forestry to native woodland, including the blocking of drainage channels and the removal of alien invasive rhododendron has not been progressed. We also witnessed the scale of peatland degradation in the SAC/SPA first-hand. This is a great disappointment to the many people who promoted the project in good-faith and is a missed opportunity for County Mayo, which should be celebrating a flagship initiative of international significance.
[1] https://www.npws.ie/sites/default/files/publications/pdf/IWM120.pdf
[2] https://www.irishtimes.com/news/environment/commission-to-refer-ireland-to-court-of-justice-of-the-eu-over-failure-on-conservation-measures-1.4294916
ENDS
CONTACT: Padraic Fogarty IWT Campaigns Officer irishwildlife@iwt.ie
Tweet
Share
Pin
0 Shares
Previous Post Press Release: Disbelief as Green ministers hand nature protection to Housing Department Next Post Environmental NGO Coastwatch Secures Win for Nature in Razor Shell Fisheries Court Case