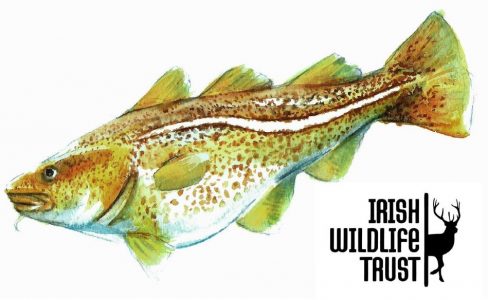 The Irish Wildlife Trust (IWT) is calling for full legal protection for selected marine fish and invertebrates in a newly released report, entitled ‘Protecting Our Ocean’s Wealth – a proposal for legal protection of threatened marine species’.
The protection of wildlife in Ireland falls within the Wildlife Act and since 1976 this law has listed species requiring special protections, including restrictions on hunting and the legal protection of resting places or important habitats. While this legislation includes many of our native animals (including deer, seals, badgers, pine martens, frogs, and nesting birds) and our most threatened plants, it expressly excludes the listing of marine fish and invertebrates without the blessing of the minister with responsibility for fisheries. To date no such marine creature has been afforded protection – something that is starkly out of step with our European neighbours. This is despite the fact that many marine species occurring in Irish waters are threatened with extinction.
The new report lists 48 species of fish (including sharks and rays), crustacean, shellfish and other invertebrate animals, as well as five types of seaweed. These were chosen based on four criteria:
·         assessed as threatened with extinction, or near threatened by scientists (such as Basking Sharks, Porbeagle Sharks, Halibut or Turbot);
·         already benefiting from some legal protection under the EU’s Habitats Directive (e.g. Atlantic Salmon or Lampreys);
·         evidence for a marked decline in Irish waters (e.g. the purple sea urchin or the native Oyster);
·         or with a very localised distribution (such as the Short-snouted Seahorse and some anemones).
Where species are commercially exploited, or the target of recreational angling, legal protection would promote the recovery of depleted populations or the designation of key areas for their conservation (e.g. through the establishment of marine protected areas – something the Irish government has already committed to). The IWT is not against the wise exploitation of marine resources but believes this must take place within a robust legal framework. The absence of such protections has led to chronic over-exploitation of certain species in the past, e.g.:
·         Angel sharks were once common around our coast but are now ‘critically endangered’ and have not been seen in some years.
·         The native oyster once spread out in vast carpets across inland bays and estuaries but now struggle for survival in a handful of depleted
populations.
·         The Basking Shark is the second largest fish in the sea, but Ireland is the only country in its range where it is not legally protected.
·         The spiny dogfish, or spurdog, gives birth to live young and has one of the longest gestation periods in the animal world. It was once sold in
supermarkets as ‘rock   salmon’ but a lack of management has left it endangered with extinction.
·         Turbot is a popular fish with diners but has suffered dramatic declines in Irish waters and is now listed as ‘vulnerable’ in the European Red List of
Marine Fish.
·         Halibut, Wolf-fish and the Common Sturgeon may be extinct in Irish waters.
·          The Short-snouted Seahorse is known only from the coasts of Dublin, Clare, East Cork and Belfast Lough.
IWT Campaigns Officer, Pádraic Fogarty says “marine life is under threat on many fronts, including overfishing, damaging fishing practices, and plastic pollution. Legal protection for our most threatened species will not on its own resolve these issues. But along with marine protected areas, control of supertrawlers and other measures, it is a necessary element in the path to recovery.”
The full report is available on our website at https://iwt.ie/wp-content/uploads/2018/02/Protecting-our-ocean-wealth-Jan18.pdf   ENDS
​
CONTACT:  Padraic Fogarty – IWT’s Campaigns Officer – irishwildlife@iwt.ie for further details
Tweet
Share14
Pin
14 Shares
Previous Post IWT welcomes overdue change in strategy in the fight against TB in cattle Next Post The Beast from the East slows spring but ban on hedgecutting and burning starts today