Press Release: More needs to be done to stop the scourge of illegal wildfires

Press Release: More needs to be done to stop the scourge of illegal wildfires 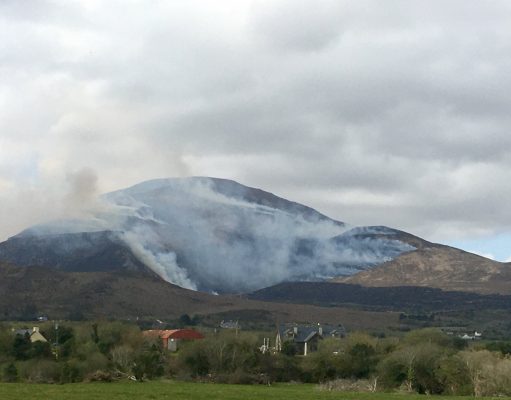 The Irish Wildlife Trust is calling on Minister for Agriculture Michael Creed and Minister for Heritage Josepha Madigan to do more to stop the annual scourge of wildfires on the hills. Wildfires are illegal at any time of year while even so-called ‘controlled burning’ is illegal during the bird nesting season (March to August). In recent days we have seen wildfires destroy large areas of hillside in Killarney National Park and the Slieve Mish Special Area of Conservation (SAC) on the Dingle Peninsula.

IWT Campaigns Officer, Pádraic Fogarty says “Although we have seen stricter penalties introduced for those with burnt land in recent years, clearly more needs to be done. It is not sufficient for government ministers to simply issue a press release and hope this problem will go away. We need active engagement with landowners across hill areas to promote restoration of habitats. We currently have no working management plan for either Killarney National Park, the Macgillduddy Reeks, the Slieve Mish SAC or countless other areas which are potentially of high nature and landscape value. Many of these areas have also been burned in the last five years – compounding the harm that is caused.”

The IWT believes that a new vision for our beleaguered hills is required where state bodies and private landowners are encouraged to rewild landscapes and/or introduce farming practices that are sensitive to nature conservation. Such an approach, we believe, would result in enormous positive benefits for climate targets, nature and people living in those areas.
CONTACT: Padraic Fogarty  – IWT’s Campaigns Officer – irishwildlife@iwt.ie
Tweet
Share
Pin
0 Shares
Previous Post Species of the week: Wych Elm Next Post Press Release: IWT calls on farming organisations to support a new approach after a wildfire sweeps through the Wicklow Mountains