Species of the week: Wych Elm 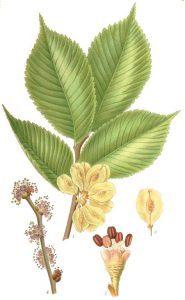 The Wych elm is the only native elm in Ireland. It is a wide ranging Elm tree, it can be found from Ireland to Russia and as far north as the Arctic Circle. They are typically mountainous species preferring moist soils and higher humidity’s, its name in Irish means mountain elm, sléibhe being mountain. Wych Elm can grow up to 40m high with a broad spreading crown, the leaves are rough oval and with toothed edges. The flowers of the tree appear before the leaves and the seed in autumn are an important food source for many birds, and the leaves provide food for caterpillars.

Dutch elm disease is a fungal disease that is transported by elm bark beetles. It is believed to be originally from Asia and spread to America and Europe. It had a huge impact on native Elm stock as they had no natural disease resistance to the fungus. This species of Elm is relatively susceptible to Dutch elm disease although it is less favoured by elm bark beetles.

There are a few places around Ireland named after the Elm tree such as Cnoc na Leamhán meaning the hill of elms in Galway or Leamach Bheag meaning small elm in Offaly. Elm wood is prized for it beauty because of its tight grained wood and has been used in wood turning to create beautiful art. Wych comes from the old English word ‘wice’ which means supple or flexible and was used in making chairs.

Many coffins are made from elm wood, the Celts believed that the wych Elm protected the dead and helped the soul pass to the underworld. Elms can drop boughs without warning and are said to wait for people to drop them on and is believed to be unlucky to cut down. In Wales wych elm was used in the making of bows it made shorted more powerful bows used in closer fighting in woods.

In the old Irish law text Bretha Comaitchesa Elm trees were regarded as the “commoners of the wood” and any damage to the trees by a neighbour required the payment of a heifer or more depending on the damage done. Elm branches were used as cattle fodder and could be the cause of their decline during the first millennium.

Featured Image by WikimediaImages from Pixabay.