IWT call on the Government to reject IFA cull on deer 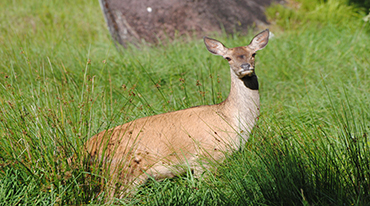 The Irish Farmers’ Association (IFA) and its media arm, the Irish Farmers’ Journal (IFA), have been encouraging the government to undertake a cull of deer in Wicklow in order to control TB in cattle. This call has been prompted by a report from the Department of Agriculture which stated that of 103 deer recently tested for TB, 16 showed lesions indicating infection with that disease. This recently published article in the IFJ article states that “It has long been suspected that deer transmit TB to cattle. However, this is the first study to directly link the two.” While the article quotes Wicklow IFA chairman Tom Short as saying “This study confirms both the incidence of TB in deer and the risk they are posing to the health status of the cattle in the farms they are encroaching upon.” It quotes IFA chairman Eddie Downey as saying “The evidence from this study shows the level of TB in deer is a significantly higher multiple than in cattle and justifies the implementation of a programme similar to the existing wildlife control programme”.

All of these statements are manifestly false. The IWT has put the Department of Agriculture report on our web site (https://www.iwt.ie/department-of-agriculture-report-on-tb-in-deer). Although it was expressly prepared for the IFA it took over a month for the IWT to get a copy and it was only released after a request was submitted under the Freedom of Information Act. It can clearly be seen that the assertions of IFA/IFJ require a leap of credibility to arrive the their conclusions. The study does not link TB in deer to cattle, and nor does it provide any evidence whatever that the TB in deer is the cause of high TB levels in cattle. One would have to wonder if the IFA/IFA even read the report and at best highlights their challenging relationship with logic. It is certainly clear that the IFA/IFJ would prefer to see wildlife being culled than addressing the real reasons why TB has not been eradicated in Ireland – and that is cattle-to-cattle transmission. The IFA/IFJ find it easy to tell Minister Simon Coveney how public money should be spent but are slower to acknowlege that after 30 years the badger culling programme has been a failure in meeting its stated aim, i.e. eradicating TB. The IWT strongly feels that culling wildlife to satisfy sectoral interests should be resisted. It is alarming that a body which benefits so much from public generosity and the ‘Origin Green’ marketing campaign, would fail to grasp the importance of biodiversity to our countryside.