In 2017 I wrote a book called Whittled Away: Ireland’s Vanishing Nature. One of the reasons I wrote the book was because I didn’t feel that people realised the true extent of the damage that has been inflicted, and continues to be inflicted, to nature in our country.

It painted a fairly grim picture but I also felt that it was important not to shy away from this – after all, we can’t really address a problem if we can’t be honest about it, even though this can be uncomfortable. Although Whittled Away did talk about some of the solutions to our ecological problems I felt there was an opportunity to elaborate on these more. Working in nature conservation can be hard going, but there is also lots happening… and lots of people who are working on making things better, so I wanted to do a project that highlighted some of this work. 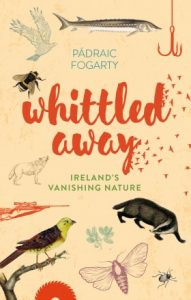 I also felt that Whittled Away never got to the heart of WHY we have found ourselves in the situation we do – and that is pretty important. It may explain why we find it so difficult to act and to make the changes that are needed. When I tried to do this I quickly found that I wasn’t talking about nature any more… but people. Inequality, consumption and trade, our values and economics… these issues kept popping up. So, I wanted this project to really make the human connection – we are, at the end of the day, central to this story.

Part 1 of this project tries to get to the root of our climate and biodiversity emergency. I look at some of the myths that have emerged around environmental protection and I examine how our values have been shaped so that destroying nature has been seen as a necessary part of development as a nation. If we are to find a way out of the crisis that we find ourselves in, we have to see the connections between multiple issues, and – perhaps above all – we have to feel that we are a part of the natural world.

I’ve called it SHAPING NEW MOUNTAINS – it’s a line from a poem by Mary O’Malley called ‘The Storm’, in which she says:

The wind rises. Locked in woodlands

I hear it turning ash and oak

As I am hauled to where the sea

Is shaping new mountains. At midnight

And all the trees are bending

I feels to me like we are in a storm right now – but the idea of ‘shaping new mountains’ is ambiguous: it could be disastrous, or it could be transformative in a positive way. In 30 or 40 years time, Ireland will likely look very different from what we see today, we have a chance now to shape that change for the better.

In the second part of Shaping New Mountains I will explore ‘Six Big Ideas’ for bringing nature back to our lives and our landscapes. Many of the ideas – I should be quick to point out – are not mine, but have been around for a while. So during 2019 and 2020 I travelled the length and breadth of Ireland to visit the people who are already helping to make some of these ideas a reality.

Like the ‘Wild Atlantic Rainforest’ in the south-west of Cork and Kerry. I visit a landowner who has made a start, a wildlife ranger who is working on the ground and a team of people working with local farmers to address the social as well as the environmental issues facing the landscape in this part of Ireland. 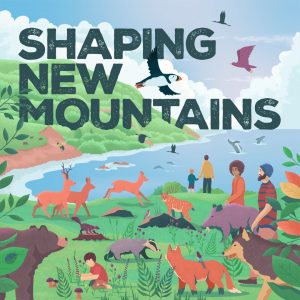 What about transforming Dublin into a ‘Natural Capital’, where trees are seen as essential infrastructure, where waterways run clean and where the mountains south of the city are allowed to develop into a wildwood with wolves and wild boar. I talk to the state forestry company which is converting industrial plantations into native forests, a politician about ‘nature apartheid’ and a city official about how we can unleash nature’s potential.

The freshwater pearl mussel is among our most critically endangered species. It can only survive in the cleanest water. Can we save the pearl mussels while providing a livelihood for farmers producing healthy food? In Farming the Pearl Valleys I talk to three farmers who are doing it.

The ‘Ulster Shark Coast’ imagines a vast marine protected area across the north of Ireland exploding with sea life. I talk to the wildlife ranger who first developed the idea, a social scientist on the human aspects of island life and I visit Arranmore Island in Donegal to find out how this can be done while encouraging traditional fishing.

The idea of a ‘Shannon Wilderness Park’ has been around for some time and imagines the restoration of peatlands and wetlands from the industrial cut-away bogs in the Midlands. I interview locals and peatland scientists on how communities can become guardians of nature.

Finally, I look at ‘Bear Country’ in west Galway and Mayo where rewilding could happen on an immense scale. Can we restore long-lost species like wolves, bears and lynx is a way that is welcomed by local people? I talk to a sheep farmer, a specialist in reintroductions and an artist from Mayo on the complexities of wilderness in a lived-in landscape.

In the two years it took me to undertake this project the world has been convulsed. Extremism is on the rise, trust and respect for others is fraying, inequality is worsening and, early in 2020, the Covid-19 virus triggered a pandemic that has so far claimed a staggering 2 million lives and which has drastically curtailed our personal freedoms. All the while climate change and ecological breakdown tighten their grip.

Extreme weather including droughts and floods as well as wildfires and water shortages have been global issues – but have also affected us here in Ireland. In the past two years, Greta Thunberg has become a global voice of climate protest, we’ve had school strikes and civil disobedience from Extinction Rebellion. It’s hard to escape the feeling that we are living through a time of great change. Will this be the dawn of a new relationship both among the peoples of the earth and between people and nature? Or have we already lived through ‘peak human’, destined to descend into a death spiral of internecine conflict and collapsed ecosystems? I want to answer these questions, not by starting at the beginning… but at the end.

In Episode 1 I look at the idea of ecological collapse: what it means; why does it matters and why it’s staring us in the face.

Shaping New Mountains will serialised over the next 10 weeks in podcast format as well as on the IWT website – iwt.ie – where you can find links and other reference material, including the wonderful artwork created for this series by Jacek Matysiak and Naomi McBride

Make sure to subscribe to the IWT podcast feed on Spotify, Apple Podcasts, Soundcloud, or wherever you get your podcasts – or follow IWT on Facebook, Twitter and Instagram for all the latest updates. To become a member of the IWT and to support our work in addressing Ireland’s biodiversity crisis, visit Become a Member – Irish Wildlife Trust (iwt.ie) – thank you for your support

Tweet
Share
Pin1
1 Shares
Previous Post 30×30: the new colonialism? Or the only way to save life on Earth? Next Post Press Release: Irish Wildlife Trust welcomes publication of report on Marine Protected Areas (MPAs) but process must be accelerated