Or the only way to save life on Earth?

In 2016 the eminent, Harvard-based biologist Edward O. Wilson, made a radical proposal for the protection of the Earth’s biodiversity. Known as ‘Half Earth’, it is “a call to protect half the land and sea in order to manage sufficient habitat to reverse the species extinction crisis and ensure the long-term health of our planet” and was published as a book of the same name.

It has since generated significant discussion within the conservation world as to whether such an approach would be achievable, desirable or even effective. As blunt targets go, it certainly captures the imagination; according to www.protectedplanet.net at present less than 10% of the Earth currently falls within a protected area with just over 16% of land and 7.7% of the marine. In Ireland the figures are c.13% and 2.5% respectively. So, increasing these figures to 50% is nothing if not ambitious.

Protected areas currently cover less than 10% of the Earth

But simplistic headline targets mask the complexities of the human/non-human relationship and can too-easily become mere hostages to fortune.

One early reaction to the idea was that it could harm biodiversity and people, particularly poor people, as it “ignores the powerful engines of resource extraction and consumption that are the main drivers of biodiversity loss globally”.

Another study concluded that protecting the Earth is theoretically possible, but that this would likely be targeted at politically ‘easy’ places (remote, barren and with little likely conflict with human uses), concluding that “achieving conservation goals by creating more protected areas in current wilderness might locally be helpful, but it is not sufficient to protect biodiversity at large”. The point being, where is protected, and how, is just as important as how much.

In 2019, an influential paper in Science Advances suggested that protecting all “native ecosystems” along with transitioning to clean energy is required to maintain the global temperature increase to within 1.5 degrees Celsius, in line with the Paris Climate Agreement. The authors proposed a Global Deal for Nature which would target protecting 30% of the Earth’s surface by 2030 in addition to a further 20% ‘designated as climate stabilization areas’ “thereby reducing extinction threats and carbon emissions from natural reservoirs”. This analysis had the advantage of joining the dots between climate and biodiversity and the 30% protection target by 2030 (30 x 30) has entered mainstream policy circles.

It is included in the EU’s Biodiversity Strategy, published last May and which includes for 10% of land and sea as ‘strictly protected’. The idea is that the Global Deal for Nature will be agreed in Kunming, China in May of this year as part of ‘COP 15’ – a meeting of the signatories to the Convention on Biological Diversity. It has been heralded as a companion agreement to the Paris Climate Accord.

Earlier this week, French President, Emmanuel Macron, convened a ‘One Planet Summit’ in an effort to build momentum towards the Kunming meeting. Along with the President of Costa Rica, he has mustered a ‘High Ambition Coalition’ of nations committed to 30×30. Ireland, represented at the meeting (virtually) by ministers Pippa Hackett and Malcolm Noonan, announced that Ireland would be signing up to the coalition. What does all of this mean? 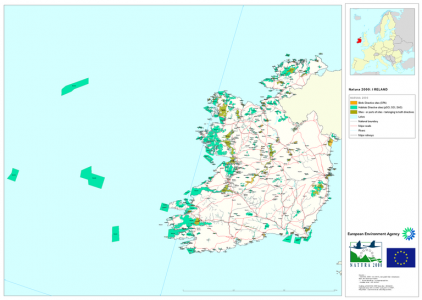 13% of land and 2.5% of seas in Ireland are nominally protected

Clearly, we have an ecological emergency which must be dealt with urgently. But how this is done will determine whether we tackle this successfully while making people feel included and addressing inequality, or simply creating more ‘paper parks’ while further alienating people and widening the gap between the haves and the have-nots.

In advance of the One Planet Summit, a group of scientists published an open letter warning that a policy paper to advance 30 x 30 “reads to us like a proposal for a new model of colonialism”, critising the way it is being promoted for an over-emphasis on replacing traditional uses of nature with tourism, the lack of diversity among the authors, and for failing to address “important drivers for the loss of biodiversity that have been identified by numerous studies, including high levels of consumption, especially by wealthy countries”.

How does this apply to us here in Ireland? While government commitment to the target is welcome it has not been articulated how the targets are to be met. We still have no legislation for creating Marine Protected Areas while we have no official analysis as to why our existing network of protected areas is abjectly failing to achieve targets that have been around since the 1990s.

With only a few exceptions, land designations in Ireland have been accompanied with a dreadful lack of communication or dialogue with the landowners (typically farmers) and a complete absence of management measures (something for which the European Commission is taking Ireland to court).

Farming organisations have reacted angrily at the idea of more designations, claiming to have been reassured by the previous government that there would be none. They have a track record of opposing any moves towards greater environmental protection and, in my experience, have refused to engage constructively in addressing concerns or promoting the solutions. But ultimately I agree with their general view that designations have been bad. They have failed people and nature, so why would we believe that more of them will achieve anything?

In my view there can be no progress until we hear an admission from the State that it has failed in its duty to protect our natural heritage and, by extension our common right to a healthy environment, and that their policies have left us with collapsed ecosystems and an outsized responsibility for reducing greenhouse gas emissions. This must include abandoning the continued pretence that Irish farming and fishing are somehow ‘sustainable’ and shutting down greenwashing initiatives, especially Origin Green.

The State must then lead in delivering on promises already made and, when it comes to expanding protected areas, it must lead here too by restoring nature on degraded public land especially national parks and nature reserves but also areas owned or managed by local authorities and semi-states like Coillte and Bord naMóna. Recent initiatives like Coillte Nature and the announcement that Bord naMóna will ‘rehabilitate’ 33,000 hectares of land are positive but they’re not enough.

The State needs to make it easy and attractive for private landowners or local communities to create and manage their own nature reserves – so that people feel a sense of ownership, belonging and connection to nature in their areas.

The current government has made some big strides in the right direction but we are still not seeing the level of urgent action that is required if we are to meet ambitious goals like 30 x 30. There is no getting away from the central role that they must play in the coming year to make the transformative changes that we know are needed. If we see this leadership then ‘half-Ireland’ will not only be achievable but will be a national project we can all take pride in.