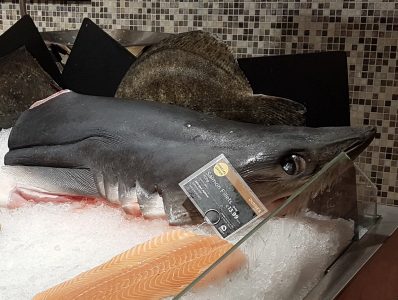 Last September a member of the public sent us this image of a critically endangered porbeagle shark at the fishmongers counter in Dunnes Stores Cornelscourt in Dublin. This, in itself, is not illegal however it is illegal to target the species or land it. We understand that no money changed hands at any stage. At the time the IWT complained to the supermarket and the Sea Fisheries Protection Authority (SFPA). The SFPA investigated but were unable to bring charges (the source was identified but the person claimed the fish was found dead). The supermarket – which this week won a seafood industry award – apologised, claiming not to have known what type of shark it was or the regulations relating to it.
The incident exposes the poor levels of protection afforded our most threatened sealife. Marine fish and invertebrates are explicitly defined in the Wildlife Act as not being wildlife and no species is listed for protection.
The IWT also believes that supermarkets and fishmongers need to do more in highlighting the link between seafood and the poor state of our marine environment. Responsible fishmongers should not sell or display endangered species.
Tweet
Share631
Pin
631 Shares
Previous Post Irish Wildlife Trust calls on Minister Michael Creed to end destructive ‘pair-trawling’ in coastal waters Next Post IWT calls for ban on industrial electrofishing